Deciding Games For Two U of R Teams on Sunday 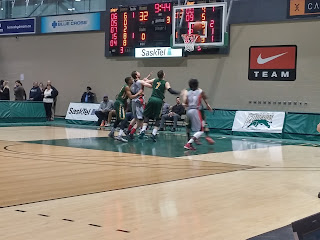 The University of Regina’s men’s basketball team dug deep and came up with a gutsy 67-64 win over Winnipeg on Saturday night at the Centre for Kinesiology, Health & Sport to force a deciding game in the best-of-three Canada West play-in series.

The Cougars trailed by one at the half, but it looked like they had let the game get away from them as Winnipeg bolted out of halftime on a 15-2 run to go up 49-34, their biggest lead of the game.

But just as Winnipeg did to Regina yesterday, the Cougars completely erased the huge second-half deficit. They scored the next 10 points to get back to within five, and another 10-0 run midway through the fourth quarter gave the U of R a lead they would never relinquish.

The two teams will decide the series on Sunday night at the CKHS. Tip-off is set for 7 p.m.

The University of Regina women’s hockey team was blanked by the UBC Thunderbirds on Saturday night, which sets up a decisive Game 3 in the Canada West semifinal series.

Kathleen Cahoon scored the game’s lone goal, striking at the 11:38 mark of the first period with a high wrist shot that beat Toni Ross short side.

UBC’s top line was responsible for the difference maker, as Rebecca Unrau and Logan Boyd collected assists on the goal.

Danielle Dube did the rest for the T-Birds, stopping all 25 Cougar shots to earn the shutout and help force a third game.

(U of R Athletics)

Anonymous said...
This comment has been removed by a blog administrator.
2/28/2016