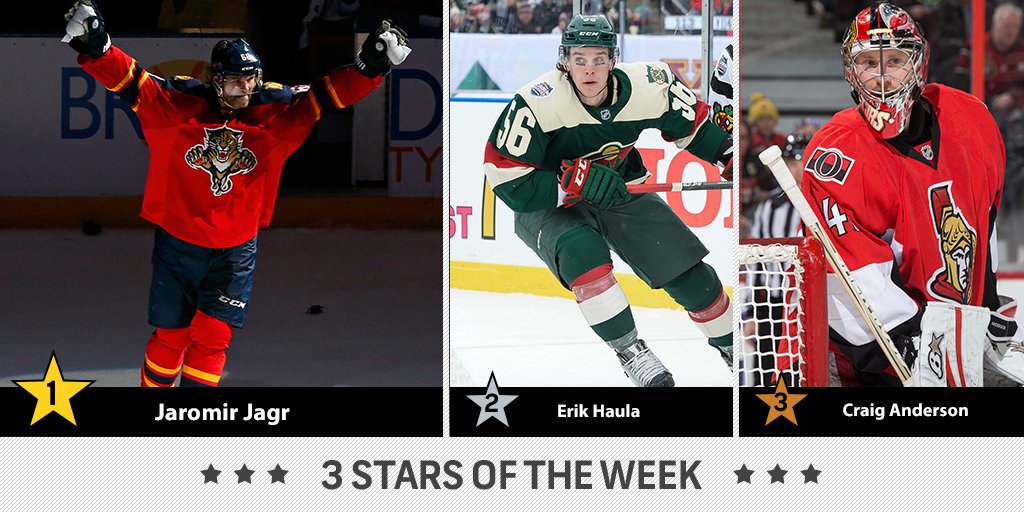 Jagr scored three goals in three games to move into sole possession of third place in NHL history and help the Atlantic Division-leading Panthers (34-18-7, 75 points) pick up five out of a possible six standings points. He celebrated his 44th birthday - becoming the 10th player (and second forward) in League history to appear in a game at that age or older - in a 2-1 shootout victory over the Pittsburgh Penguins Feb. 15. Jagr then scored the team's lone goal in a 2-1 shootout loss to the San Jose Sharks Feb. 18. He capped the week with two goals, the 741st and 742nd of his career, to move past Brett Hull (741) and into sole possession of third place in NHL history in a 3-1 triumph over the Winnipeg Jets Feb. 20. The Kladno, Czech Republic, native has collected 20-23-43 in 56 games this season, reaching the 20-goal milestone for the 19th time - tied for the third-most such campaigns in League history with Dave Andreychuk and Brendan Shanahan.

Haula shared first place in the NHL with 2-5-7 in four games to lead the Wild (27-22-10, 64 points) to a sweep of their four contests, including a victory in the 2016 Coors Light NHL Stadium Series at TCF Bank Stadium in Minneapolis, Minn. He began the week with a pair of multi-point performances, recording 0-2-2 in a 5-2 win over the Vancouver Canucks Feb. 15 and 1-1-2 in a 5-3 victory against the Calgary Flames Feb. 17. After being held off the scoresheet in a 5-2 triumph over the Edmonton Oilers Feb. 18, the University of Minnesota alumnus registered 1-2-3 - his first career three-point game (171 GP) - in a 6-1 victory against the Chicago Blackhawks Feb. 21 in the 2016 Coors Light NHL Stadium Series. The 24-year-old Pori, Finland, native has picked up 7-13-20 in 53 appearances this season, matching a career high in goals while setting personal bests in assists and points.

Anderson posted a 3-0-0 record with a 1.58 goals-against average and .951 save percentage to backstop the Senators (28-26-6, 62 points) to three straight wins. He made 38 saves and denied both shootout attempts he faced in a 2-1 victory over the Buffalo Sabres Feb. 16. Anderson then stopped 30 shots in a 4-2 triumph over the Carolina Hurricanes Feb. 18. He closed the week by making 29 saves and turning aside all three shootout attempts he faced in a 3-2 win over the Detroit Red Wings Feb. 20. The 34-year-old Park Ridge, Ill., native has compiled a 25-19-4 record in 48 outings this season, including a 2.76 goals-against average, .917 save percentage and three shutouts.