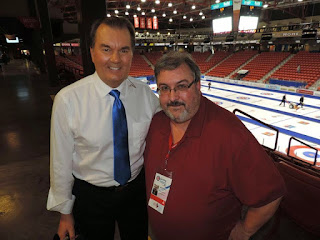 Where would curling be if it wasn't for TSN, and what would Vic Rauter be doing if it wasn't for curling?  The Toronto Star published a tremendous article on the Canadian broadcasting icon, (and yes, he is) on the weekend as Vic settled in for yet another Scotties Tournament of Hearts. It is the 30th year he has been the "voice of curling" in this country and on Saturday afternoon at 230 when he came on and said "Hello Canada, and welcome to Grande Prairie, Alberta for the Scotties Tournament of Hearts", you know the next month is his time to shine with the Scotties, the Brier and then the Worlds. Former TSN compadre Jay Onrait refers to Rauter in the article as "The Vin Scully of Curling". I can't argue that. Vic, along with Linda Moore and Ray Turnbull to start, and now Russ Howard and Cheryl Bernard bring the game right into our living rooms and while the sport isn't pleasing to some, more than a million watch the final of the Brier and the Scotties (which is more than some CFL games in the past couple of years) as they make you feel right at home. As was evidenced in Moose Jaw last year, Vic is as popular to those in attendance as players like Jennifer Jones, Rachel Homan and Stefanie Lawton. When it comes to the popularity of himself and the game, Vic as he always does deflects anything away from him by saying in the article "“People will often say hockey is the lifeblood of the country, but I’ll tell you, there are plenty of towns, particularly in the Prairies, where there’s no hockey arena, but there’s a curling club.”  I can't argue with that. 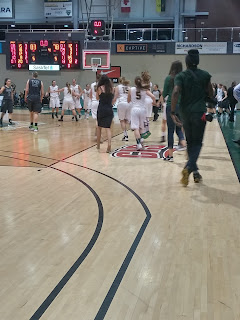 Those who know me know I am a huge supporter of U of R Athletics. Getting a chance to speak with the coaches and players of the respective teams on "Locker Talk" on Access every week just reminds me what great ambassadors for the U of R these student-athletes are.  Having done p x p of Cougars basketball for Access in the old gym and the CKHS along with having the privilege to be the public address announcer for the basketball teams the last few years obviously means I have a soft spot for both programs, and I was delighted to see what did on Friday.  The gym was full for the womens game against the U of S. I think it is the first time I have seen it that way in any game that wasn't national championship related.

I went to Friday's game as a spectator seeing another engagement prevented me from doing p-a duties. When you have two of the top 5 teams in the country going at it, you would expect a great game and it was with Regina winning in the end. As I sat in the stands before moving courtside, the people just kept flowing in. It was great to see and with playoff basketball on the horizon for both the men and women, I hope the trend continues. I will say this though for those in attendance. It's OK to cheer and get loud! A group of Huskies fans were in the crowd Friday night---about 10 or so---and they made more noise than the pro-Cougar crowd that was in there. When Katie Polischuk hit a 3 in the 1st half, I let out a yell and had several look at me as if I needed to be committed. Its OK to cheer people. It really is! It's something that has affected those at the Brandt Centre from time to time when watching Pats games too. We don't sit on our hands at Rider games, so why do we do it elsewhere! Bottom line is the Cougars will be home the next two weekends with Winnipeg here to play the men in a best of three next weekend and Calgary here for a date against the ladies team in two weeks team. Many will be in the gym so why don't you make some noise for something other than a free t-shirt!

From what I was told, Saturday night was a great night at the CKHS too, but like many others in Regina on Saturday night, I was at Brad Paisley. 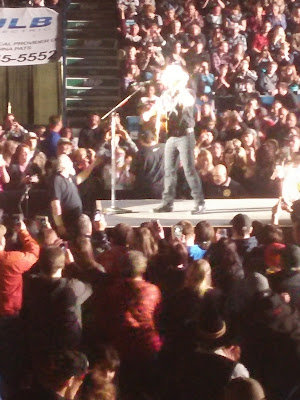 The Brandt Centre was sold out for one of the top performers in country music and he showed everyone why with a great night of music. He sang all his great songs like "Whiskey Lullaby", "Online", "Ticks", and "Crushin It". When he went into "Country Nation" and Rider highlights came on behind him on the video-board, the crowd went nuts. Nice touch Brad! The Regina stop was his last Canadian one after being in Calgary, Edmonton and Vancouver. I am guessing he didn't go to Winnipeg because he couldn't find any Bomber highlights to insert into the package.

Steve Simmons of the Toronto Sun points out that the CFL season opener featuring the Ti-Cats and Argos at BMO Field will happen on the same night as the NBA draft. It is safe to assume more attention will be paid on what the Raptors are doing with their future than what the Argos are doing with their present. Did anyone take a look at any potential conflicts?

Friday's column in which I placed the Stampeders ahead of the Eskimos in the standings caught the attention of many people including Bo Levi Mitchell and Odell Willis who both tweeted out responses. There are some out there who believe Edmonton will go first from worst in the West. Everyone is entitled to an opinion.

-----
I would have loved to see the Minnesota Wild honor the North Stars by wearing their jersey for Sunday's outdoor game against the Blackhawks. The alumni wore it at an old-timers game the night before. That jersey was great!

----
During Sunday's outdoor game, the NHL on NBC gave an all-Minnesota team of players currently playing in the NHL. What would an all-Saskatchewan team look like? Braden Holtby would be the startting goalie, you would have guys like Jared Cowen, Matt Dumba and Nick Schultz on the blueline with the forwards having the likes of Ryan Getzlaf, Jordan Eberle, Tyler Bozak and Brayden Schenn on it. I think it would be cool if we could have an all-Canadian tournament featuring a Team BC, a Team Alberta, a Team Sask/Man, a Team Ontario, Team Quebec and Team Maritimes. Alas, that is just a pipe-dream. It would be a great event though.

There are some out there suggesting Kobe Bryant is greater than Michael Jordan. I can only laugh at that. Yes, it is well known I am not the biggest Kobe fan, but it isn't even close as far as I am concerned as to who the better player is. I'm not even sure if Kobe is the greatest Laker to ever wear the purple and yellow with that honour likely going to Kareem or Magic Johnson.

If anyone is wondering why Jordan Spieth shot one of his worst ever rounds on Thursday at the Northern Trust Open, look no further than this blogger who took Spieth in a 5 dollar Draftkings contest. The luck of Scruffy rings true again!

Didn't like what I saw from Team SK yesterday. Too many easy shots that were missed. Experience plays a huge factor. I hope she is good enough to prevent SK from being in that pre-qualification mess.

Paisley knows how to entertain a crowd. Great show!

Does Odell Willis even know what a blog is or how to spell it?
\
perry

I can see Campbell winning 3 or 4 games this week. She won't be bad enough to put SK in a pre-qualification contest. Experience means a lot at this event though, and she will learn from it. It has been a great first year for them.

Curling not a sport, Its a get together to socialize. One thing though, Mr. Vic Rauter world class individual and announcer.

Vic is to curling what Bob Cole/Danny Gallivan have been to hockey. He is a great guy as well Very down to earth unlike others in your industry.

A picked rock is what cost Jolene her game against Quebec yesterday. She will be fine!

Great seeing great crowds for Cougar basketball, but you are right Scruffy. It would be nice if those people would create some noise and give Regina a home-court advantage. You would think more of the student population would come in there and make it tough, but NOPE!

Paisley was outstanding as was the female presence in the Brandt Centre. Single guys must have gone crazy seeing the "talent" in the house. God bless country music!

The person who thinks curling isn't a sport needs to go out on the ice a time or two.

Been there done that back in the day, Balgonie, Cupar, Markinch etc, yawn...