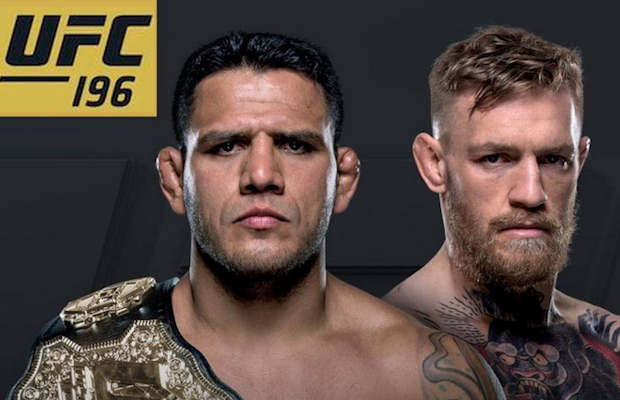 Rafael dos Anjos has been forced to withdraw from next week's highly-anticipated UFC 196 main event fight against Conor McGregor.

According to multiple sources, dos Anjos suffered a broken left foot last Friday, forcing him to pull out of the lightweight title fight against McGregor. The Brazilian was hoping the injury would get better over the weekend but when it didn't his team had to make the call to cancel the fight on Monday.

The UFC is currently working on finding a replacement to fight McGregor on less than two weeks' notice, however, nothing has been finalized at this time.

It's déjà vu all over again for McGregor. Last summer, then-featherweight champion Jose Aldo withdrew from his fight against the Irishman just eleven days before UFC 189. Of course, back then, the UFC adjusted quickly and booked Chad Mendes to fight McGregor and the event went off without a hitch. Furthermore, this marks the fourth time in McGregor's eight UFC fights that his original opponent was forced to pull out of their fight.

McGregor, the current featherweight champion, was on the verge of history, as he was hoping to become the first fighter in the promotion's history to hold two belts at the same.

According to dos Anjos' coach Rafael Cordeiro, RDA won't need surgery on his injured foot at this time, however, he can't put any pressure on it for at least three weeks.

"I am devastated," he said, "because we were preparing well for this fight and we were ready."

Thus far, members of Team Donald Cerrone and Team Anthony Pettis, including Pettis himself, have openly campaigned for the fight. Nate Diaz and Frankie Edgar have also been considered, however, Edgar is currently injured.

Diaz gets the fight