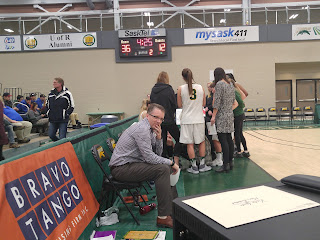 Topaloglu and Prokop will immediately add to the team's depth at post, while Goncalves is a perimeter player that Taylor expects to play major minutes right away. Reid, also a guard, is expected to redshirt the upcoming season.

"This class is significant because it addresses two of our big needs moving forward – size in the post and a perimeter scorer to replace Katie Polischuk," Taylor said. "This year's class combined with the group we brought in last year set the program up to remain at an elite level for the next number of years. In my 12 years as head coach, these past two years and the year we brought in Charlotte (Kot) and Katie (Polischuk) are the best three recruiting classes we've had in my time here."

Despite only turning 20 in June, Goncalves already has four seasons of experience at the highest level of professional women's basketball in Portugal. She played the past two years with Quinta dos Lombos in the Liga Feminina, and for two years before that with Sport Alges Dafundo. Goncalves has amassed a wealth of international experience over the past five seasons, representing Portugal at the U16 level in 2013, at the U18 level in 2014 and 2015, and at the U20 level in 2016 and 2017. She was named a tournament second-team all-star by eurobasket.com after averaging 14.4 points per game at the FIBA U20 Women's European Championship in 2016, and hit the scoresheet even more in the 2017 edition of that tournament with an average of 20 points per game in seven contests for Portugal.

"Carolina is a tremendously skilled perimeter player and I expect that she'll transition into a critical role immediately for us," Taylor said. "Her ability to play in a pick-and-roll offence suits us perfectly, and she has the ability to be a scoring threat at this level."

Topaloglu (pictured) is a 6-4 post from Istanbul, Turkey but holds dual citizenship with Switzerland and represents the Swiss Confederation internationally. A product of the Fenerbahçe SK club program, Topaloglu played for Fenerbahçe's junior team last year before suffering a season-ending injury in April. Topaloglu has twice donned a Switzerland uniform, playing in the FIBA Women's European Championship at the U16 level in 2014 and at the U18 level in 2015.

"Bilge adds size in the post for us and with her experience internationally and in the Turkish professional system, we expect she'll bring a high skill level to our team," Taylor said. "Once she's fully recovered from her injury, we expect her to be able to give us another post presence. With her and Lauryn (Prokop) coming in this year and Angela (Bongomin) back from last year, we're going to be set at the five for the next number of years."

Prokop will become the program's first player from Saskatoon since joining Canada West in 2001. She played a major role for Team Saskatchewan in four consecutive summers, playing at the U15 level in 2013 and 2014 and at the U17 level in 2015 and 2016. She was named a first-team all-star and won a gold medal with Saskatchewan at the 2014 U15 National Championship in Edmonton, and won a bronze medal at nationals in both seasons with the U17 team. Prokop is also a champion at the high school level, leading St. Joseph to a provincial 5A title in 2016.

"Lauryn is a perfect fit for our style of play and I'm thrilled to have her join our program," Taylor said. "She's a true low-post player and is also an excellent passer. I have had the opportunity to coach Lauryn and her high basketball IQ, skill set, and compete factor set her apart. She's been someone I've targeted over the past two years and will impact our team right away."

Reid hails from Warman, Sask. and also played her high school ball in Saskatoon, winning a provincial 5A title in 2017 with powerhouse Holy Cross High School. She's extremely familiar with Prokop, having played with her on provincial teams in 2014, 2015, and 2016. Reid was part of the team that won the 2014 U15 National Championship, and took bronze medals in 2015 and 2016 at the U17 level. Taylor anticipates that Reid will redshirt the upcoming season.

"Faith is just an outstanding individual with a great work ethic," Taylor said. "I had the opportunity to coach her on a club team and came away so impressed. She will help elevate our team in practices and will be a great representative of the program. With her work ethic and talent, I'm excited to see how she develops."

The Cougars, who will host the 2018 U SPORTS Women's Basketball Championship at the Centre for Kinesiology, Health & Sport, will kick off the 2017-18 season with an exhibition game against Lakeland College on Sept. 23. They'll also host Windsor, Saskatchewan, and Brandon at the Cougar Classic non-conference tournament which begins on Oct. 12, and will play a home game against NCAA Div. II opposition Minot State on Oct. 28 before Canada West play begins on the road at Manitoba on Nov. 3 and Nov. 4.