Trent Richardson Says No To Riders and CFL 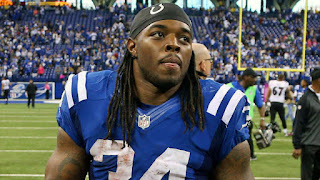 Trent Richardson was headed to Canada to hopefully breathe life into his professional career with the Saskatchewan Roughriders, according to 3DownNation.com. However, the former star running back with the University of Alabama decided against it because the terms of the deal could have kept him in Canada for two years, meaning he wouldn't have been able to sign with an NFL until 2019 thus derailing his plans for a comeback.

It's been just over a year since Richardson was last in an NFL training camp. He was waived by the Ravens on Aug. 6, 2016, three months after signing with them, making Baltimore Richardson's fourth NFL team since the Browns drafted him third overall in 2012. He last played a regular-season game in 2014.

Riders head coach and GM Chris Jones didn't seem too bothered by this as he gets his team ready for Friday's game in Edmonton.

Jones told reporters after Tuesday's practice "I don't even care" when asked if he thought Richardson might change his mind and come north.


Why is Jones so adamant on these reclamation projects? What's next?


Stay at home! We have Marshall and Lafrance and I'm OK with that!

Was it Jones the coach or Jones the GM that doesn't care?
I can see why Jones the DC wouldn't care.


Will Duron Carter be playing alongside his Dad before the season is over? Would anyone be surprised?