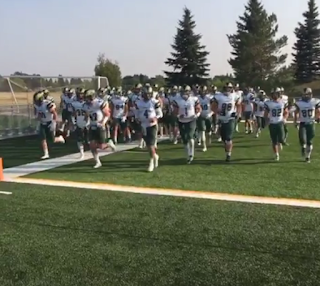 
The Regina Rams went to Medicine Hat on Wednesday night and left with a 39-3 victory over the Calgary Dinos.

Regina quarterback Noah Picton did not play for long, but backups Tyler Vieira and Seb Britton had nice nights.

Vieira was 9 of 13 passing during his time in the game while Britton threw three touchdown passes---two of them to former Sheldon Williams Spartans receiver Zach Shalley.

The Rams will now get ready for what is a huge game to start the schedule.

Steve Bryce's crew will tangle with the UBC Thunderbirds at Mosaic Stadium Friday, September 1 in a 7 o'clock start.
at 8/23/2017