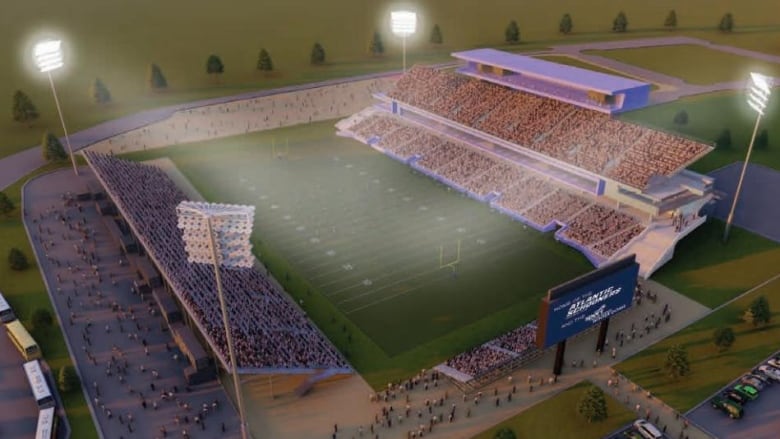 HALIFAX -- A $110-million stadium proposal submitted by a group hoping to land a CFL franchise in Halifax will be analyzed by city staff after narrowly surviving a council vote that could have killed it outright.

Regional council voted against a motion brought forward by Coun. Sam Austin on Tuesday by a margin of nine to eight.

Austin needed 11 members to support his motion to rescind the previous direction given to city staff, which is currently examining a proposal that was submitted by Schooners Sports and Entertainment on Aug. 31.

"We're going to pay to build the stadium, help with the ongoing costs, assume the risk, fix the off-site transportation needs, but not own anything and leave the profits to Schooners," Austin told council.

"I know pulling the plug on this now is politically scary. I just don't have any confidence (that) what has been submitted will result in anything I can vote for, so I think we should bail out of this now."

Austin's motion was seconded by Coun. Shawn Cleary who called the proposal a "non-starter."

"There's not enough detail in here," Cleary said. "If they want to come back with something different, fine. But I can't imagine we would let staff waste their precious time when we have other things to do, on something that's going to come back and we are going to vote against anyway."

Late last month, the municipality released a proposal by Schooners Sports and Entertainment for a 24,000-seat stadium in Shannon Park in Dartmouth.

The venue would be used for football, soccer, rugby, lacrosse and other sports, in partnership with Sport Nova Scotia, when not being used by the CFL. It would include an inflatable dome that would be installed during the winter months.

City staff is reviewing a proposal that outlines funding options, including one in which the municipality makes an upfront payment of 15 to 20 per cent of the project's cost. Another option would see annual loan payments of $2 million, with the proponents paying $1 million and a ticket surcharge capped at $10 per ticket on all tickets sold for events.

A third option would see the regional municipality making cash payments for 25 per cent of the project stretched over a number of years, totalling about $25 million.

Coun. Bill Karsten spoke out against killing the proposal "on the spot," saying it would send the wrong message to business and make it appear that council can't be trusted. Karsten tabled a second motion that would require city staff to come back with a recommendation on financial options in December.

It passed 10 to 6 with support from Mayor Mike Savage.

"Our staff are paid to do this kind of work," Savage said. "I think it's entirely reasonable to say, 'Look, why don't we see if we can get a decision?' We should be able to know by Dec. 1 where we are."

Chief administrative officer Jacques Dube told council that it was unlikely Schooners Sports and Entertainment would submit another proposal if the current one were rejected.

Dube said the staff analysis was planned to take six months, but it would be possible to provide at least some information by December. He said much of the information at that point would be "assumption-based" because not all relevant data on revenue and expenses would be available.


Still skeptical on this happening.