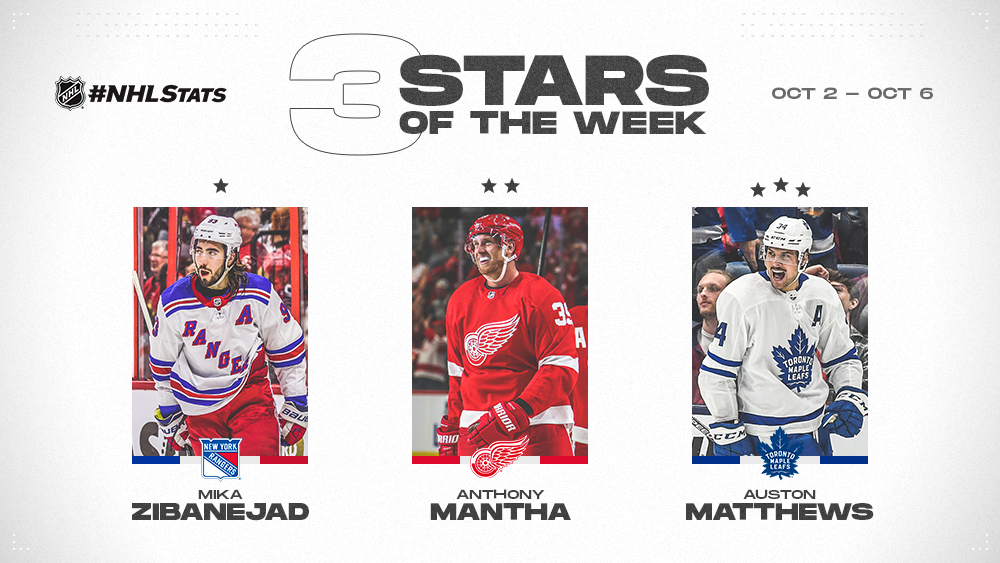 Zibanejad topped the NHL with 4-4—8, collecting four points in each of his first two outings of the season to power the Rangers (2-0-0, 4 points) to a pair of victories. He registered 1‑3—4, including the tying goal in the third period, in a 6-4 triumph over the Winnipeg Jets Oct. 3. Zibanejad then posted 3-1—4 (including the winning goal) – scoring on the power play, at even strength and while shorthanded – to lift New York to a 4-1 victory over his former team, the Ottawa Senators, Oct. 5. The 26-year-old Huddinge, Sweden, native became the first NHL player since 1995-96 to record eight or more points through his team’s opening two games of a season (Jaromir Jagr: 3-5—8 w/ PIT) and just the second player in Rangers history to achieve the feat (Rod Gilbert: 0-8—8 in 1976-77). Zibanejad, the sixth overall selection in the 2011 NHL Draft, also became the first NHL player to compile four-plus points in each of his team’s first two contests of a season since 1990-91 (John Cullen: 1-8—9 w/ PIT).

Mantha shared the League lead with five goals and ranked second overall with seven points (5-2—7) in two games to also guide the Red Wings to a 2-0-0 start to the season. He recorded 1-2—3 in a 5-3 victory at the Nashville Predators Oct. 5. Mantha then scored all four Detroit goals, including a natural hat trick and the tiebreaking tally with 53.3 seconds remaining in regulation, in a 4-3 win versus the Dallas Stars Oct. 6. The 25-year-old Longueuil, Que., native became the second player in Red Wings franchise history to register four or more goals in the team’s home opener, joining John Sorrell in 1933-34 (4-0—4 vs. NYA). Mantha, the 20th overall pick in the 2013 NHL Draft, also became the 23rd different player in team history to post a four-goal game and the first to do so since Feb. 2, 2011 (Johan Franzen: 5-0—5 at OTT).

Matthews matched Mantha with five goals in three games (5-0—5) to help the Maple Leafs (2-0-1) earn five out of a possible six standings points. He scored twice, including the winning goal, in a 5-3 triumph over the Ottawa Senators Oct. 2. In doing so, the No. 1 overall selection from the 2016 NHL Draft became the fourth player in League history to collect at least one goal in each of his first four career season openers (9-2—11 in 4 GP). Matthews added one goal in a 4-1 victory against the Columbus Blue Jackets Oct. 4, followed by two goals – including the tying strike with 1:15 remaining in regulation – in a 6-5 shootout loss to the Montreal Canadiens Oct. 5. The 22-year-old Scottsdale, Ariz., native ranks third in the NHL with 116 goals (in 215 GP) since making his debut in 2016.