Welcome to Friday and the usual assortment of things running through my muddled mind.   As always, these come in no particular order 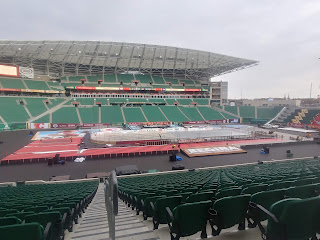 --It is going to be a great weekend at Mosaic Stadium as the NHL comes to our fair little city.  There has been a lot of excitement about the Tim Horton's Heritage Classic since the official announcement was made on January 1.  Some, including myself, were hoping Connor McDavid and the Edmonton Oilers would be a part of the game, but they are not.

I think Regina is still an Oilers town, but I also think it is a Jets town and we will see that Saturday.  Cheering for Winnipeg at Mosaic Stadium?  Would you rather cheer for Calgary?  Regardless who you cheer for, wear your best hockey jersey and come out Saturday for what should be an event to remember.  Let's just hope the weather stays as nice it has been although the forecast is calling for a windy, cool night.   It won't be anything like the Habs-Oilers game at Commonwealth though.  That was damn cold.

--What member of the Jets or Flames are you most interested in seeing? No, the answer for this blogger is not Milan Lucic or Cam Talbot.

--Riders head coach Craig Dickenson was asked who on his team would be his starting six for a hockey game.  He answered Phillip Blake in net, Brett Lauther and Micah Johnson on defence and the forward line of Manny Arceneaux, Cody Fajardo and William Powell.

Jon Ryan used to play goal so that's an automatic, I'd have Ed Gainey and Derrick Moncrief on the blueline with the forward line being Cam Judge, Cody Fajardo and Shaq Evans.  I know Ryan can skate, but can the others?  Hmmmmmm!!

--Imagine a 16 year old kid coming out on Sunday for the Pats-Hitmen game and seeing 10,000 plus people in the stands. YIKES! Who's kidding who, it will likely be that way for virtually all of the players in the game.  This isn't a Saturday morning game in a freezing cold rink kids!  For a lot of them, this will be the game of their life and once in a lifetime opportunity.

--A team in the KHL has been fined $300,000 rubles after their head coach allegedly threatened to set a referee's car on fire. You simply can't make that up!  Somewhere John Tortorella has to be smiling.  Imagine that happening in a league here.

--The CFL schedule maker really screwed up this year.   How can you not have the Eskimos playing the Riders until the second to last week of the season and then have a back-to-back.  Who made this thing up?  For that matter, why is it the Eskimos always come to Regina late in the season.  Is there a reason why they can't come here in July or August?

Meanwhile, the Riders will head to Commonwealth where green and gold will be mixed in with green and white much the same as it is in Calgary when the /=S=/ heads to McMahon.

--Trevor Harris will be back at quarterback for the Eskimos.  That does make them a better team. Does it make them good enough to beat the Riders?  It certainly does if the green-and-white go in in the wrong frame of mind.

--If the Bombers o-line allowed Chris Streveler to get beat up the way he did against Calgary last week, how can you not expect the same thing to happen to a less than nimble Zach Collaros.  If he plays, it could be career suicide. I am legitimately scared for Collaros if he takes the field.  Does he get to the end of the 3rd quarter?

--Best wishes to Dale Hawerchuk as he fights stomach cancer.  Oh yeah,  fuck cancer!! (sorry, but it had to be said).  It would have been great to see him in Regina this weekend as he is Jets royalty.  The older demographic will remember him at the highly controversial Memorial Cup in Regina when his Cornwall Royals won the title with an overtime win over Mike Keenan (spit phooey) and the Peterborough Petes..

-- The Regina Thunder played to a great crowd at Leibel Field last weekend and the Rams will play to what is expected to be a great crowd tonight at Leibel when Manitoba comes to town.  The only difference is the Thunder were playing in a playoff game while the Rams are playing in a nothing game since they have been eliminated from the playoffs.  Many have said it and I echo it.  The Rams and Thunder should be playing all games at Leibel because of the intimate atmosphere which creates a better environment.

--During Hockey Night in Canada last weekend, Brian Burke suggested a shot clock in NHL overtime because teams just rag the puck in search of that one chance that will end it.  Here's a better idea. Scrap the shootout and play until either a period ends or there is a winner.  Chances are 95 percent of the games that go into OT will end up having a winner.

--The Raptors not only gave out t-shirts (again) to fans attending this week's home-opener, but all in attendance were given a replica championship ring.  The sad thing is a lot of that crowd was likely corporate with the suits in attendance not giving a rats you know what about a replica ring.  There were a lot of fans who would die for one of those things.  I wonder how much some will go for on EBay.

--Someone please explain to me why we have the Trivago guy, the 7-11 guy, Canadian Tire guy and the A&W guy, but we don't have the Wendy's girl anymore.  Can we get the guys to hit the road and call for a return of the Wendy's girl? --An era ends in Regina tonight as the last High Impact Wrestling card is held.  Wrestling isn't going away in this city and with more and more of it on TV these days, there is a comeback happening.  High Impact has filled a void in this city for a long time.  It was great going to Gronkville and while I haven't been there in a while and won't be tonight due to Heritage Classic events, I look forward to seeing CWE pick up the torch.  Another group is also in the city that has taken some of the HIW talent and there are a lot of stories out there,  Stories, shmories, just give me independent wrasslin!

I wonder how many people will show up to the NHL game wearing their Riders jersey since the Riders play at 5 pm and the NHL game starts at 8 pm.

To see guys like Gaudreau speed around the Mosaic ice will be cool.


I'm with ya on the Wendy's girl! Where did she go?


Will Rittich and Hellebuck wear toques?