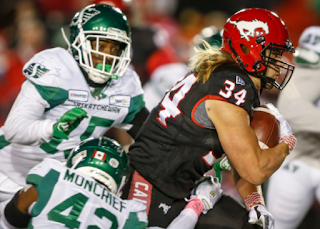 Bo Levi Mitchell threw for 298 yards and two touchdown passes to help lift the Calgary Stampeders over the Saskatchewan Roughriders with a 30-28 home win on Friday night. The Stamps improved their record to 10-5 while jumping past the Riders for first in the West.

An early field goal and a fumble recovery touchdown on a kickoff gave Calgary an early lead, but the Riders responded on defence later in the first quarter with a pick-six from Nick Marshall.

Saskatchewan took the lead in the second quarter after Cody Fajardo led an 84-yard touchdown drive, but the Stamps quickly regained the lead with a touchdown drive of their own that saw Mitchell find rookie receiver Hergy Mayala in the end zone. Fajardo led the Riders to a field goal just before half-time, cutting Calgary’s lead down to just two points.

The Stamps extended their lead in the third quarter with Mitchell’s second touchdown pass to Mayala, but Saskatchewan made it a one-possession game in the fourth quarter with a 42-yard field goal from Brett Lauther.

The Riders made it a two-point game with under three minutes to play after Fajardo threw a 34-yard touchdown pass to William Powell, but Mayala helped seal the victory with a late first down gain for Calgary.

Both teams are 10-5 with three weeks to go in the regular season.  The Stampeders have two games against Winnipeg and one against BC.  The Riders have a game against BC and two against Edmonton.

So tired of BLM

Did Calgary take a time out at the end to gloat?


Riders are good, but they're not Calgary good. They will get one more shot to ruin the GC party.

It would be great to see Bo walk off field as a loser knowing Riders would get their room for GC.

Another single? What's the league record for punting incompetence?

It doesn't matter who gets injured or who moves on the NFL, Huffer just finds another one.