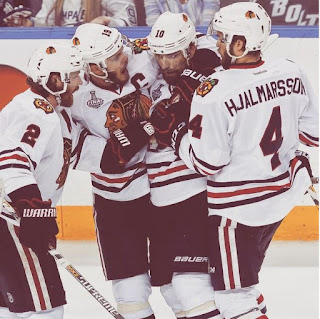 The Chicago Blackhawks again will lean on their stockpile of Stanley Cup Playoff experience with a chance to clinch a championship in Game 6 of the 2015 Stanley Cup Final against the Tampa Bay Lightning at United Center on Monday (8 p.m. ET; NBC, CBC, TVA Sports).

The Blackhawks lead the best-of-7 series 3-2 and can win the Stanley Cup at home for the first time since 1938.

Those who have won it before are using those past experiences to help the current group focus.

"We know this is the game we could win the Cup and it would be special to win it here at home," Blackhawks right wing Patrick Kane said Monday. "But let's focus on winning one hockey game and all the other storylines will stick out. We talked [Sunday] a little bit about things. It's important about worrying about everything you have to at the moment … people coming into town, tickets, things like that. Get all that stuff out of the way as quickly as possible and focus on hockey."

Unlike their 2010 championship, the Blackhawks have a lot to draw from with their extensive successes in the recent past. They've had opportunities to clinch championships in Game 6 in each of their previous two Cup runs and gotten the job done each time.

The Blackhawks have eight players on the roster who were part of the 2010 and 2013 championship teams, a group that general manager Stan Bowman builds around as the core of the team.

"I think going into the game the night before [Game 6 in 2010], we had one or two guys that had been in that situation before," Blackhawks coach Joel Quenneville said. "I think that helped getting a feel for what they went through, how they approached it. [We've] got a lot of guys in it now."

At the morning skate, Quenneville didn't show any changes among his forward lines from the previous two games and he almost certainly will dress the same defensemen. Goalie Corey Crawford will get a chance to backstop Chicago to the Cup for a second time.

"It's a chance for this organization to do something special," Kane said. "It's one of those things where you're tossing and turning, your mind is racing. At this time of year everybody is thinking about what's going to happen. The best thing is go out and play, let your mind rest."

Otherwise the Lightning could pounce on a distracted team and force a Game 7 at Amalie Arena on Wednesday (8 p.m. ET; NBC, CBC, TVA Sports). It's been one of the closest Cup Final series ever played, and the Blackhawks know the margin for error is thin.

"There's been no letdown [from Tampa Bay]," Quenneville said. "They've been after us since Day One, at the puck drop. They're a good hockey team. I think there's a ton of respect on our side [for] what they're capable of. Every shift is so meaningful. We don't expect that to change.”