The CFL season has arrived. Training camps are now in session as all 9 teams start forming what they hope will be a season that ends in victory in Winnipeg in late November.

With the Riders heading to Saskatoon for camp again this year, I heard people moan and groan about the fact camp is in the Bridge City. Suck it up!!! Regina gets the Riders all season long so if Saskatoon wants to be their home for two weeks, lets not bitch about it.  I would love to have camp in Regina too so I could get a look at some guys, but I'll see the guys who stick when the season starts and each and every practice goes at Mosaic or the Eventplex, so let it go.

TSN has re-upped with the CFL and signed a three year contract extension that will keep them as the exclusive broadcaster of the league until the year 2021. It also means the Grey Cup will be done by a TSN crew and farmed out to stations across the country. This is wrong! If your team is in the Grey Cup, local announcers should be able to do the game. I think it is safe to say you want your locals calling what could be a historic moment in team history and not a national voice.  Would "Go Crazy Saskatchewan---Go Crazy" or "Its Elation in the Rider Nation" be as popular a catchphrase if it were a TSN voice saying it instead of Rod Pedersen. The same could be said with Mark Stephen in Calgary, Bob Irving in Winnipeg or Rick Moffat in Montreal. If the Super Bowl can have the local guys do the game, the Grey Cup should have that ability too. Here's hoping the CFL and TSN can work that one out.

In Friday's "This and That" column, there were 5 questions from yours truly about camp. A gentleman who reads the blog (he has nothing better to do with his time I guess) said his big question is how does Weston Dressler respond this season. Let's face the facts, 2014 was a wasted season for the diminutive Dressler. He went to the NFL and when he came back, he didn't even get two games with Darian Durant under centre and then had to struggle watching Tino Sunseri and Seth Doege trying to get the ball to him. 2014 certainly wasn't what Dressler wanted and I suspect he is ready to show everyone he is the Weston Dressler we know he is and will have another 1000 yard season.

This thankfully hasn't flown under the radar at training camp.  The announcement of former BC Lion Angus Reid as a guest coach is a HUGE plus for Dan Clark and Corey Watman. Those two are battling to fill Dominic Picard's shoes and we know Picard was a nasty SOB. Reid was too and he will be able to give a lot of valuable tips to both of those guys as they move forward. Just another in what is a long list of tremendous moves by Corey Chamblin.


The best all-around player in the NHL did it again.... 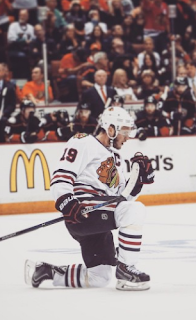 Jonathan Toews re-defines the word "clutch" and in the big game, he got the job done. What is this guy's track record. How about this courtesy Sportsnet Stats....

All that and he is four games away from having his name on the Stanley Cup for a 3rd time. Sid, Shmid. This guy is and has been the best player in the NHL for the last five years and many know it. When the big games hit, number 19 is there to play and play he does.

I look at the Cup final and I think Chicago should win, but this is a Tampa team that beat the best team in the NHL to get here and they owned a very good Montreal team in the regular season and the playoffs. It's a real Captain Obvious statement to say whatever team gets better goaltending will win, but that may be the case. The minutes played by those Chicago defencemen--especially Duncan Keith has to be concerning to the Blackhawks though. That rest for him will be huge.

The Memorial Cup final was everything I thought it would be and congratulations to both the Oshawa Generals and Kelowna Rockets for treating us to a dandy. The WHL may not have won the title, but its' still the best developmental league in the world as far as I am concerned.

There is absolutely no excitement for the Womens World Cup of Soccer in this neck of the woods as far as I can tell. The only angle to this event for Saskatchewan is the fact Team Canada's Kaylyn Kyle is from Saskatoon. Soccer Canada obviously didn't care about promoting the event here by not bringing the Coca-Cola FIFA soccer tour to Regina or Saskatoon and calls and e-mails to Soccer Canada to get Kyle on the Sportscage went unanswered. That's not a good way to do business and grow the sport in your own backyard if you ask me, but what do I know.

FIFA president Sepp Blatter declared himself  "The President of Everybody" after being re-elected to the position despite vehement opposition. He became the president again when the only other person running against him withdrew. Hmmmmmmmmm....did Blatter's people promise him something. That would never happen in FIFA.


This wins the Internet and perhaps the entire Twitterverse as far as I am concerned for the weekend and maybe the year as we approach the halfway mark. 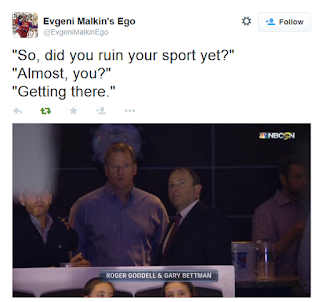 Speaking of Bettman, do you think if he were ousted as NHL commish tomorrow, that Ron McLean would be back as host on Hockey Night in Canada. There is no doubt Bettman's ego and his dislike for Ron is one of the big reasons McLean has seen his role basically disappear and despite the fact many Canadians want Ron back in the chair he has occupied for so many years, Bettman's ego won't allow that to happen. It seems to me Ron did his thing every night in the Stanley Cup playoffs yet if you noticed, Strombo only hosted on nights of the East final with Daren Millard being the host in the West final. Can Strombo not handle the load that McLean could? Did Rogers think we couldn't as hockey fans stomach Strombo in a role I think he has failed at every night.  I think it is safe to say once the Stanley Cup is presented, the Rogers bigwigs will be sitting down trying to find ways to improve the product in year 2 of their 12 year deal. I think they were stunned not to get some TSN personalities like Gord Miller and James Duthie to jump ship and that they realize there is work to do. The numbers declined this year for a lot of reasons and it is time for Rogers to consider Year 1 a chance to do some things by trial and error as many will do and now find some solutions.

I bet Sepp Blatter and Gary Bettman would be the best of buds if they aren't already!

Ken Rosenthal of Fox Sports is suggesting splitting up the baseball season into two with a first half winner  declared at 81 games with everything resetting to zero and a second half winner declared. I don't know if I like that idea or not.

If Montreal mayor Denis Coderre truly wants baseball in his city, he needs to go out and find someone who will build a stadium. If he can get that committment and shovel goes into ground, his desire to see the Expos come back will be answered. If not, forget about it.

It seems the Minnesota Twins have turned things around under first year manager Paul Molitor. They had just their first 20 win month since their World Series days. Meanwhile, John Gibbons continues to sit there while the Blue Jays spin their wheels and lose games they have no right losing. Gregg Zaun's dissection of their loss Sunday and the way this team is playing is something that had to be said and was. He was bang on! There isn't a lot of intelligence in that clubhouse right now and add that to weak pitching and you're going nowhere in a division that can be had.

---
One last thing. Flowing Springs Golf Greens is looking at purchasing a defibrillator should anyone need one while out on the course. A GoFund me campaign has been set up to try and get one. Anyone wanting to chip in (no pun intended) can do so right here

That's it! Have a good week!

Hey Scruffy, I suppose that you would also be at training camp in Stoon, but someone has to stay back and read the weather.

Hey Scruffy, anon 1 must be jealous. Maybe you can work in the drive-thru for him one day!

There is no doubt Glenn is the guy if something happens to Darian. Why did the braintrust keep Sunseri? He had his chance and he failed. I don't think the braintrust has a solid plan at the QB position and we need to find someone to groom.

If I were starting a team today and could take anyone, Toews would top the list. He's a less flashy Messier!

Please limit the use of "as far as I'm concerned" to once per column. It would be best to get rid of it all together, but baby steps.


As far as I'm concerned, I will continue to do things the way I want. Thanks for the input

I love this time of year when football is coming for the next 7-8 months here and down south.
Optimism everywhere in fans that this is their year spews forth in the bars in Sask, on the fields of Manitoba, downtown in Montreal, at the Beach in Van..you get the picture. Everybody's smiling...no need to fire the coach or ask for the back-up QB yet anywhere.

As far as I'm concrned, that tweet is simply hilarious and oh so true!!

Funny how a lot of teams (KC, Houston, San Diego, Minnesota) see improvement yet the Jays keep floundering under Gibbons.

Dressler will be just fine with DD throwing him the ball. No worries there!

As far as I'm concerned, some people should just shut the hell up.

Completely agree on Angus Reid helping out Clark/Watman and the others.