Sinclair Saves The Day For Canada 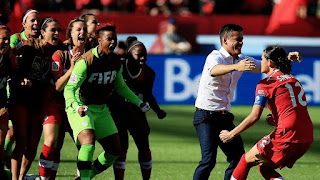 Hosts Canada kicked off the 2015 Women’s World Cup in Edmonton on Saturday with a late 1-0 win over China in front of a record crowd of 53,058, the most for any soccer match staged in the nation.  It was a sloppy, nervous match that belied how much pressure the host nation is under; the quality of the game also did little to dispel the black clouds that this tournament kicked off under thanks to the ongoing scandal that has enmeshed FIFA.

The lone goal of the game came in stoppage time when Rong Zhao took out Adriana Leon in the box, allowing Christine Sinclair to slot the ball home from the spot. The call was an easy one, with Zhao all over Leon, but it was cruel on a China side that had been organized and tight for the majority of the match.

Played on hot, choppy artificial turf that sent up plumes of black chips with every stride and pass, both teams struggled to control the ball on a surface that was better suited for Canadian football than soccer. To be sure, that’s exactly what the surface at Edmonton’s Commonwealth Stadium is: the long-time home for the Eskimos actually ripped out grass in 2010 to conform to the rest of the CFL. To say it made for a poor soccer game would be something of an understatement.

With the heat from the carpet approaching 120ºF at kickoff, both teams spent large stretches mired in midfield, unable to truly test the other. China, which deploys a very organized backline and midfield that seeks to trap and counter, were largely content to sit back and absorb. Canada, which had hoped to snatch an early goal, were noticeably tiring by the interval, having seen several scuffed shots blocked or parried away.

In fact, the best chance of the first half fell to the Chinese, when Lisi Wang lined up a free kick on the far side after a sloppy foul from Desiree Scott, and somehow managed to ping it off both posts with keeper Erin McLeod sprawling. But the Chinese seemed content to hang back even with the Canadians reeling, and the danger passed for the hosts.

Canada had a few chances of their own, with Christine Sinclair missing an early chance to the far post, and Kadeisha Buchanan being foiled twice down low. Josee Belanger had a shot come off the crossbar, but in truth, it looked closer than it really was. When China effectively smothered a series of shots from Sinclair and Buchanan and calmly started a counter, you began to feel a goal would be quite some time in coming. And, that was indeed the case.


The second half was even more torpid, with the hosts visibly gassed from the heat and the pressure of the occasion. Canada continued to dominate possession with China content to absorb, but there was very little sense of true danger from either side. In fact, as Canada’s mistakes started to add up, it was curious that the Chinese couldn’t take fuller advantage.
Sinclair had what passed for a chance with nine minutes to play that illustrated how tepid the half was, a softly hit shot set up by Sophie Schmidt that was so easy for Fei Wang to smother. But when Sinclair finally slotted home with just seconds to play, it sent the home crowd into rare cheers.
Canada will now face New Zealand on Thursday in Edmonton.