WHL Getting Ready for its 50th Season

The Western Hockey League concluded its Annual General Meeting today in Vancouver, highlighted by the announcement of a series of plans and special events associated with the WHL’s upcoming 50th anniversary season. The WHL was established in the 1966-67 season. 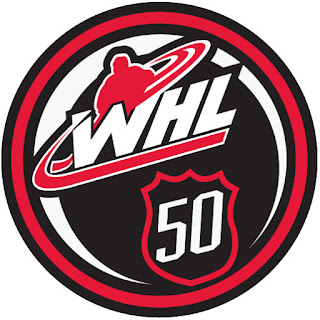 The WHL’s 50th anniversary season will officially open on Thursday, September 24th in Moose Jaw, SK when the Warriors host the Regina Pats. The East Division is considered the birthplace of the WHL and Moose Jaw is the home of the first ever WHL championship team. The Moose Jaw Canucks became the first League champions when they defeated the Regina Pats to close the WHL’s inaugural season of 1966-67.

“We are excited to celebrate the rich history of our League next season,” commented WHL Commissioner Ron Robison. “We have been fortunate to have many talented players, excellent teams and exceptional people in the WHL since 1966, and we truly look forward to honouring these individuals and sharing the story of our League throughout our 50thanniversary season.”

The WHL also announced that a commemorative 50th anniversary season book will be published which will detail the history of the League as well as its Clubs, builders, players and key members. The book will be released in September.

Fans will also be able to have their say as the WHL announces its Top 50 Players of All-Time next season. In addition to a select panel of WHL historians, fans can vote to help determine the best players ever to suit up in the WHL. Each week, the WHL will also honour two of its 49 League Championship teams leading up to the 2016 WHL Playoffs with ‘Championship Tuesdays.’

Each WHL Club will host a game next year to commemorate the WHL’s 50th anniversary season and honour the history of its franchise and alumni.

In addition to further initiatives during the 50th anniversary season to be announced at a later time, the WHL will host a series of CHL special events throughout the course of the year. The Subway Super Series will begin in Kelowna on November 9th and will also see Kamloops host game two on November 10th. The 2016 CHL/NHL Top Prospects game will be held in Vancouver on January 28th. Finally, the 2016 MasterCard Memorial Cup will see the host Red Deer Rebels and the 50th WHL Champion battle for the top prize in junior hockey from May 19-29 as the event returns to Alberta for the first time in over 40 years.
at 6/17/2015

So what you are basically saying here is the Pats will go into the opening weekend of the WHL season with a record of 1-0.

The league has a few wrinkles to iron out in AB...
.. Lethbridge franchise is bleeding money badly and public ownership group rejected a chance to sell to a private owner last month.
Meanwhile Medicine Hat owners can't settle on a lease with the City's brand new CanAlta Centre (yes they built the dang thing without a tenant in place!!) only about a couple hundred yards from the Fertilizer plant. Owners can't believe the new place won't have the old place rates. (New place not run by City). Season tix packages haven't even gone out yet for renewals and not sure if scheduling of games has occurred yet
...if no deal can be made the Hat probably gets a non-stop diet of "Riverdance" "Beatles" tribute bands and the magic of David Copperfield's lesser talented brother Lyle..
...maybe the Sasky teams need a neutral site location for ex-pats to relive their old days back home.