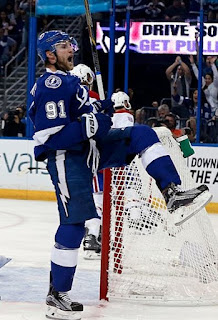 Despite having two days off, Tampa Bay Lightning captain Steven Stamkos said it hasn't sunk in that he will be going to his first Stanley Cup Final. The Lightning advanced after a 2­0 win in Game 7 of the Eastern Conference Final against the New York Rangers last Friday.

They will face the Chicago Blackhawks in Game 1 of the Cup Final at Amalie Arena on Wednesday (8 p.m. ET; NBC, CBC, TVA Sports). Tampa Bay returned to the ice for a light practice Monday and Stamkos said he's ready for the challenge. "I don't think it's really truly going to sink in until we drop the puck, to be honest," Stamkos said. "I know there's going to be a lot of smoke and mirrors with the media attention and all that. We came [Monday] and it was sort of a light day to get things organized. We just want to focus in on the business aspect, the game itself. That's what we're preparing to do.


Get these next couple of days out of the way and it's game on." The majority of the Lightning will be experiencing the Cup Final for the first time. Center Valtteri Filppula won the Stanley Cup with the Detroit Red Wings in 2008. Forwards Brenden Morrow and Brian Boyle, and defenseman Anton Stralman, are the only other three Lightning players who have competed in the Cup Final.

The Blackhawks will be in their third Cup Final in the past six seasons after a 5­3 win against the Anaheim Ducks in Game 7 of the Western Conference Final last Saturday. Chicago won the Stanley Cup in 2010, defeating the Philadelphia Flyers in six games, and in 2013 against the Boston Bruins in six. Stamkos said the Blackhawks experience is something to be considered but the Lightning have also gained experience throughout the Stanley Cup Playoffs.

Lightning coach Jon Cooper said the weekend off gave players a chance to rest and get away from hockey for a few hours. "You can see everybody had that little extra jump in their step [Monday] in the sense that we needed a little bit of rest," Cooper said. "It's been a phenomenal ride that's still going for us and I can tell the guys are excited. But it was good for guys to get away and come back. [Tuesday] is really when we'll kick in and start planning for our opponent."