Rogers Will Do Some Tweaking To Hockey Night In Canada 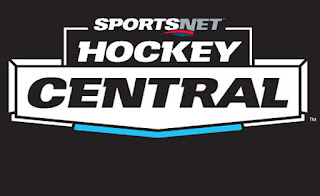 There is plenty of room for improvement on “Hockey Night in Canada,” but none of it has to do with controversial rookie host George Stroumboulopoulos, says Rogers Media boss Scott Moore.
As the Saturday night staple wraps its first season as a Rogers property, Moore said Tuesday that tweaks are planned for the show’s second pass and he stands by the former CBC personality’s controversial tenure.
“People love to debate certain things in Canada and almost anything involving hockey on Saturday night becomes a debating point,” the president of Sportsnet and NHL properties, said at the launch of Rogers’ fall season.
“I think Strombo’s settled in really, really nicely. The playoffs were terrific for him and we expect people to grow even more used to him next year.”
Some of HNIC’s more outspoken viewers remain staunchly opposed to the new face of the Saturday night doubleheader, the result of Rogers’ 12 years, $5.2-billion deal for NHL broadcast rights.
Moore says viewership is up overall on television — but barely, at two per cent.
“‘Hockey Night in Canada’ — was it up as much as we would like? No, but I think the boys in blue down the street might have had something to do with that,” said Moore, citing the disappointing performance of the Toronto Maple Leafs.
He expects more interest next season with the arrival of new Leafs coach Mike Babcock and budding young star Connor McDavid joining the league, likely in Edmonton assuming the Oilers select him first overall in the 2015 NHL Draft later this month.
Rogers Media president Keith Pelley says it’s not fair to focus solely on linear TV ratings when more and more people are turning to other platforms, including GameCentre Live and on-demand mobile options.
“It is a multi-platform, long-term rights deal and so you can’t look at the linear ratings in isolation,” said Pelley.
Still, Moore expected to see adjustments to HNIC in the off-season, guided by detailed analytics, including minute-by-minute ratings and audience surveys. For one thing, he’d like to see more consistency in who is on the panel on a particular night.
“We’ll be looking to tweak over the next little while,” said Moore, who rates the first year “a strong 7.5 out of 10.”
“We experimented a lot in the first season to figure out who worked well with whom. We have a really good indication now of what works for us on Saturday in primary playoffs and that’s Elliotte Friedman, Kelly Hrudey and Nick Kypreos.”
And from what he can tell, viewers are not turning away from Stroumboulopoulos any more than they would during other game breaks.
“The big danger in our business is you’re programming for millions of people — you don’t want to let the dozens of people on Twitter tell you what to do.”
Other changes move Ron MacLean’s “Rogers Hometown Hockey” over to Sportsnet from City starting Oct. 10, which Pelley said was the plan from Day 1.
He said the move will allow City to build a new animation comedy block featuring “Family Guy” and “Bob’s Burgers.”
Moore, who also touted Sportsnet’s best ratings in its 17-year history, adds that MacLean will get more screen time in a second season of “Hometown Hockey,” through more pre-game and post-game reports.

I can miss a game now and then on TV but I CANNOT miss Coach's Corner!

1. Find a host who knows something about hockey (HINT: You have that guy...he hosts Hometown Hockey)

3. Do a better job of translating to us what channel what game is on. The variety of games is nice, but I hate flipping the channel looking for the game I want