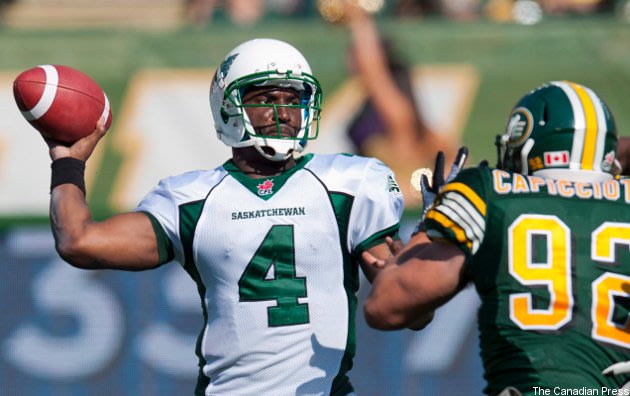 The Saskatchewan Roughriders have announced international quarterback Darian Durant has agreed to a new contract for the 2016 season. As per team policy, financial details of the contract were not released.

Durant is set to enter his 11th season with the Green and White after originally signing with the team as a free agent in 2006. The 33-year-old University of North Carolina product will enter 2016 among the franchise leaders in all statistical passing categories. His 24,668 passing yards and 135 touchdowns each rank third among the Riders all-time leaders - also putting him inside the top 25 all-time CFL leaders in both categories.

He is a two-time Grey Cup champion having won with the Riders as the starting quarterback in 2013 and as a backup in 2007.

Time for the trolls to go back under the bridge where they belong!

Penton says it is a 50 thousand dollar cut. Way to go out on a limb and take one for the team. Maybe giving back 100-125 thousand could have gotten Dressler back. He is DD's favourite target isn't he?

Good for Darian. Putting team in front of the individual. Perhaps #97 and #7 should have considered that.

I can't be the only one thinking after what I heard today Darian is here for one more year and that's it. Why would he want to stay especially when they wouldn't sign his number one receiver. Enjoy DD this year Rider Nation because he is gone!

What other team is going to sign a aging injury prone player at 450.00 k who hasn't played nearly two seasons? No takers so he'll milk one more year out of the riders.