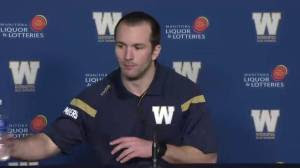 It's Canadian football's version of the Hatfields and the McCoys.
Receiver Weston Dressler's move from the Riders to the Blue Bombers is almost traitor-like for fans of one of the most popular players to wear green and white over the last decade.
Not even Dressler's girlfriend and her Regina family are on board – yet.
“They were obviously upset. Or more saddened than upset, I should say, to see me not be part of that organization anymore,” Dressler said in his first day in Winnipeg. “They're obviously fans of the Roughriders. We'll work on getting them into some blue and gold, though.”
The rivalry between Winnipeg and Saskatchewan goes back decades, culminating every season in back-to-back, mid-season clashes: the Labour Day Classic in Regina and the Banjo Bowl in Winnipeg.
In early September Dressler will try to help his new team stop a trend that's seen it lose 11 straight Labour Day Classics to his old one.
“That'll definitely be an interesting moment for me. I'm sure it'll be unlike any other on the football field,” Dressler said. “That'll be a tough day, for different reasons. But once we get to that point it'll be about finding a way to win that game... just on the opposite side now.”
Until then, he'll deal with the barbs from former teammates and friends in Regina, who can't believe he chose the hated Bombers.
“It's a very unique situation to be in,” Dressler acknowledged. “I'm just trying to enjoy it and have as much fun with it as I can. A lot of my old teammates are joking about it... We're talking about how weird it will be.
“But I don't think it'll take me long to fall in love with this organization and this community and these fans, much like I did in Saskatchewan.”