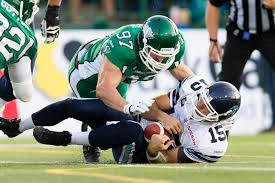 The Hamilton Tiger-Cats announced Wednesday that the football club has agreed to terms on a two-year contract with international free agent defensive end John Chick.

“John is an incredible talent that brings significant CFL experience, professionalism and a winning pedigree to our team,” said Tiger-Cats Vice-President of Football Operations, General Manager and Head Coach Kent Austin. “He has the ability to create pressure on the quarterback and has been solid against the run throughout his career. We’re thrilled to be able to bolster our defence with a player of his caliber.”

Prior to turning pro, Chick was a four-year starter at Utah State at both linebacker and defensive end, finishing his Aggie career with 163 tackles, 39 tackles for loss and 23.5 quarterback sacks.

This will come back to bite Jones in the ass. An argument could be made on Dressler, but not on Chick.