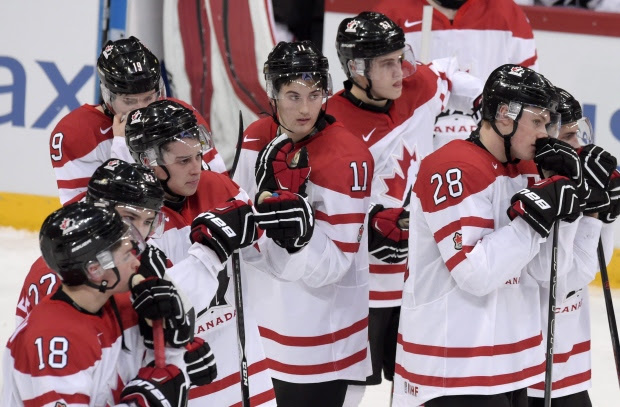 The autopsy started as the final horn started on Saturday in Helsinki. Canada, for the first time in a long time, did not advance to the semi-finals at the World Juniors. Why?  There are a multitude of reasons as to what happened with the biggest one continuing to be there is a mindset in this country that there is no one better than Canada when it comes to junior hockey and that simply is no longer the case. Yes, the Canadian Hockey League is the best developmental league in the world, but when you see the rosters of the various European and US teams you see that many of those players come from the Ontario, Quebec and Western Hockey Leagues. The game is no longer ours which sucks if you are Canadian, but great for the world.

Just before the tournament started, I spoke with Rogers Sportsnet's Sam Cosentino. Like many of us, he thought Canada was good enough to play for a medal, but he also cautioned that there were many good teams and Canada would have to be on the top of their game because this might be the most competitive tournament from top to bottom. Sam wasn't wrong!

Right from the get-go, I didn't like the look of Team Canada and I was somewhat surprised when TSN's Craig Button in a pre-tournament special picked Canada to win. On opening day, Canada got beat by an American team that was far superior and it showed. You shouldn't struggle to beat Switzerland and Denmark, but this team did for whatever reason. The chemistry wasn't there.

The goaltending was not adequate, there was no 2nd or 3rd line presence and Jake Virtanen, who was brought in to do what Curtis Lazar did last year, had a terrible tournament. That being said, if it wasn't for a very unfortunate delay of game penalty on Joe Hicketts. Canada might well have playing in the semis as they played their tail off in the quarter-final loss to Finland.

There is no need to over-analyze this performance as sooner or later this was going to happen. Does the formula need to be tweaked somewhat with the event back on Canadian soil next year. I don't know if it does. Put the blame on coaching, put the blame on the players or do both, but this didn't come as a surprise to me because the rest of the world has caught up. Once Canadian hockey fans realize that, they will see this isn't the tragedy it is being made to be.

The fans have spoken in the NHL and when it comes to the all-star game, they should not have the opportunity to speak loudly again. The inclusion of Arizona tough guy John Scott as a "team captain" is a joke and it is all because of fan balloting. John Scott doesn't need to give up his role at the game and I am sure it will be an experience of a lifetime for him as he rubs shoulders with the game's greats, but his presence will mean someone who should be there isn't and isn't that what the NHL wants? Here's hoping Scott doesn't embarrass himself at the 3 on 3 spectacle, here's hoping that for fun, someone drops the gloves with him and here's hoping the NHL decides to limit just how much say the fans have in this process as they have failed the game.

Steve Yzerman has a nice little trade card to dangle in Jonathan Drouin. The 3rd overall draft pick in 2013 has been a bust and he wants out of Tampa. What can Yzerman get for him and what will he look for in return? One would have to think goal-starved teams like Nashville and New Jersey would be interested and I would have to wonder if the Calgary Flames might want to kick the tires and give them another forward who could be a top 6.  One would have to think now that his agent has said Drouin wants out that it won't be long before he is dealt, but Travis Hamonic has been looking to get out of Long Island for a while and that isn't happening.

Plans kept me from seeing UFC 195. It sounds like the main event between Robbie Lawler and Carlos Condit was one I should have seen and by the sounds of it, there will be a rematch. Are there too many rematches happening in UFC. We know we will see another Rousey-Holm matchup and it sounds like another Aldo-McGregor bout will be coming. The rematches are great, but they stifle the progress of others in the division and I wonder what it does for PPV numbers. Obviously not a lot when it comes to the last point otherwise they wouldn't be happening.

If the Pittsburgh Steelers go a long ways in the NFL playoffs, one can go no further than thanking Ryan Fitzpatrick. What an awful 4th quarter by the Jets quarterback.  The Jets have no one to blame but themselves for not being in the Super Bowl party.

Peyton Manning will lead the Denver Broncos into the playoffs. Are we looking at one more Brady vs Manning battle?

Seattle vs Minnesota in the first round of the playoffs. I'll take that!

After some one-sided efforts in the Dec 31 and January 1 US College Football bowl games, Oregon and TCU along with West Virginia and Arizona State treated us to some damn fine action on Saturday.

If the Saskatchewan Rush wanted to get started on the right foot and get people's attention, you can't go wrong in beating a Calgary team to get things started.  My Twitter feed Saturday night and into Sunday had a lot of excitement for the Rush's opening night win over Calgary. I am guessing that will translate into what should be an exciting evening at SaskTel Centre.

Toronto has issued an extreme cold alert at minus 15 degrees celsius. My god, how will they cope!

Virtanen ended up being a huge liability.

An NHL guy is supposed to be a positive and not a negative.

Very disappointing effort from our guys, but at least we won the Spengler.

John Scott would get a lot of positive publicity if he thanked the fans and then declined the opportunity. The NHL all-star game is a joke and this is another exhibit why.

Have they spelled out all the game rules of the All Star Game?? After 6 minutes of time won't this even dissolve to your local rec hockey games where half a team does't show up and the other side is a wee bit tipsy?
When is it? OK NOTE TO SELF-find great basketball game on TV, ..or decent Curling match?...or wacky Poker tourney?...Corner Gas Rerun...new Fireplace channel?

You might to enlighten Vanstone a little bit when it comes to WJHC. His column today is somewhat revolting. Put some thought behind it Vanstone!

Is anyone else sickened when hearing of another Sask family wiped off the earth by a drunk driver? I hope sports teams step away from any promotion on alcohol.

The fans voted for him and the paying customer is always right ! I have no idea who this guy is, as I don't follow hockey anymore since the sportswriters seem to tell us what we should like and accept in the sport !
Kinda like the regular media