Brandt Centre Sold Out For Game 6 of Pats-Rebels Series 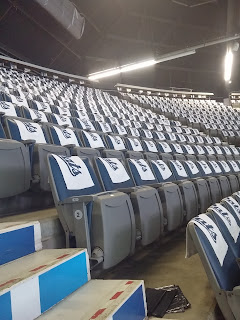 The Regina Pats Hockey Club is pleased to announce Game Six of the second round playoff series against Red Deer is sold out.  Capacity at the Brandt Centre is 6484.  The game will be played tomorrow afternoon beginning at 4 p.m.


This is the fourth sellout of the year for the organization and first of the playoffs.  Previous sellouts happened February 29, March 11 and March 18.  Attendance through the first four playoff games averaged 6163 fans per game.  It’s the third best post-season attendance in the league.


Through the regular season, the Regina Pats attendance averaged 4563 fans per game, an increase of almost six per cent over the previous year.


“Thank you to our fans,” said Pats President Todd Lumbard.  “It’s wonderful to see people believing in the team and showing their support in this way.  As an organization and we will continue to do our best to give fans the kind of hockey team they deserve.”

Hey Regina, we are still a better sports town than you!

We all live in Saskatchewan, stop pi##in on each other. I like the Rush, Riders, Pats, MJ Warriors, etc.

Thanks for the input Saskatoon now thank all the Regina people for helping sell out your lacrosse game last night and move on.

Thanks for the memories Pats