Crosby is NHL's First Star of The Month for March 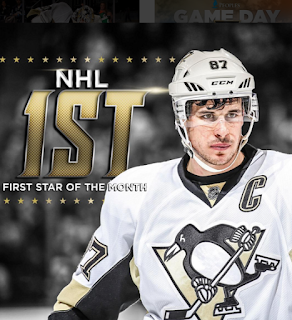 SECOND STAR – DEVAN DUBNYK, G, MINNESOTA WILD
Dubnyk went 10-2-1 with a 2.06 goals-against average, .927 save percentage and one shutout in 14 appearances to propel the Wild (38-29-11, 87 points) to a 10-4-1 March, one win shy of the franchise record for any calendar month. He yielded two or fewer goals in nine of his 14 outings, highlighted by a 29-save shutout March 26 against the Colorado Avalanche – the Wild’s closest competition in the race for the final playoff spot in the Western Conference. The 29-year-old Regina, Sask., native became the third goaltender in club history to reach the 30-win milestone; he owns a 32-23-6 record with a 2.30 goals-against average, .920 save percentage and five shutouts in 63 games this
season.

Burns shared second place in the NHL in both assists (13) and points (19) in 16
games to guide the Sharks (43-29-6, 92 points) to a 9-7-0 March and their 11th playoff
berth in the last 12 seasons. He collected at least one point in 12 of his 16 contests,
including seven multi-point performances (as well as three straight to close the month).
In doing so, the 31-year-old Barrie, Ont., native set career highs and single-season
franchise records for goals (27), assists (46) and points (73) by a defenseman. Overall,
Burns paces NHL blueliners in goals while ranking second in both assists and points in
78 games this season.

PIT is hot at the right time, they have now passed NYR for 2nd in east.