﻿
There are times when the best laid plans go awry. That certainly was the case Sunday.  I had been asked to do some games for the Keystone Cup weeks ago. I said absolutely and was pencilled in for the medal games. At that time, no one knew the Regina Pats would be playing at 4 o'clock that afternoon. With the bronze medal game at 10 and the gold medal game to follow, one would assume there would be no problem in calling both games and then walking through the Co-Operators Center  to the Brandt Center for Game 6 against the Rebels. That plan blew up in a big hurry. With less than 30 seconds to go in the 3rd place game between Alberta champion North Peace and the host Regina Capitals. the Navigators (North Peace) scored to send the game into overtime------and then some.  The contest went into triple overtime before it was decided with the Alberta squad coming out on top 5-4. I have done the play by play (poorly) of many hockey games over the years, but I think this was the first triple overtime game I had called. It was also a one man operation, so I had no colour guy to bounce things off of. Fast forward to the gold medal game and wouldn't you know it, it also goes into overtime, but 100 Mile House BC won it 3-2 with the goal coming just 2:35 into Period 4 as they get their hands on the trophy symbolic of the Western Canadian Junior "B" title.  It was a tough pill to swallow for a Saskatoon team that showed throughout the tournament that they were the class of the event. That last game is the toughest though and the Quakers couldn't pull it off. 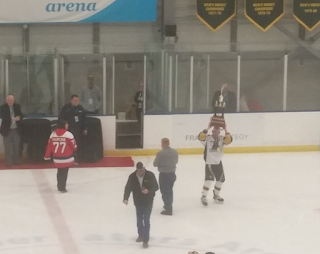 The big question was where was the Pats game at. It was well after 4 o'clock thanks to the triple overtime game. A tweet soon told me what I wanted to know. There was 3 and a half minutes left in the 2nd period and it was 4-1 Pats. It meant I let two guys who can call a hockey game much better than me take over as I got in the car and listened to Phil Andrews call the rest of the 2nd period and watched Rod Pedersen do the 3rd.  I wanted to be inside the Brandt Centre for a game that I knew would be electric and then some, but some times the best laid plans get wrecked. That's OK though because I was witness to two very good hockey games and two games that had a certain electricity of their own.

Proof positive as to how EVRAZ Place is quickly becoming one of Canada's top sporting venues came this weekend. While construction continues on the new Mosaic Stadium, there weren't many parking spots at the Co-Operators Centre Saturday and Sunday as the Keystone Cup was winding down, as was an SHA bantam camp which was attended by scouts galore and the WCP Soccer Cup was happening. That was just on Saturday! Add the Pats game at Brandt Center to that on Sunday and the place was absolutely jammed with hockey players, personnel and fans. I laughed when one gentlemen ( I think he was from 100 Mile House) said to me on Sunday "You guys aren't going to know what to do with that stadium and now Calgary wants one too." I told him we will find a way and Calgary can dream on. He agreed with me 100 percent.  He also asked me if the Rush play next door at the Brandt Center, and I had to inform him that the Rush are based in Saskatoon.  By the way, congrats to them for finishing first in their division as they look for the repeat.  I wonder how that will go over in Edmonton if it happens.

How about that Pats game on Sunday! Several told me during and after the game via text message they have never heard it louder in the Brandt Center. When Connor Hobbs scored early in the 2nd, one text message said they just blew the roof off of this place. I can only imagine! Can the Pats pull off a Game 7 win in Red Deer and come home for the Eastern final against the high-flying Wheat Kings? We will find out Tuesday night. If they do, one wonders if the team will look to squeeze some more seats into the building. Regardless of what happens, it is great to see so many people talking up the Pats again after so many years of that not happening---at least not in a positive way. John Paddock gets a lot of credit, but look above Paddock as well to see where that credit should start. 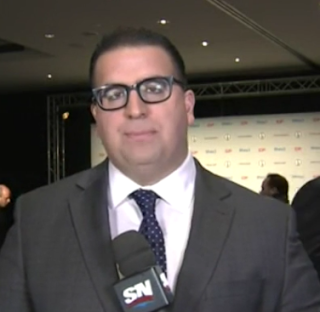 Sportscage Insider Arash Madani revealed via Twitter on Friday there is a lot of interest in the first pick overall in next month's CFL draft. As we know, that first pick belongs to the Saskatchewan Roughriders. Madani says multiple teams are showing interest.  I don't know what Chris Jones and crew are asking for that number one pick, but I will be stunned if they keep it.  Jones, John Murphy, Jeremy O'Day know getting a package of players and picks will benefit their team in the long run.  I don't know when they would pull the trigger on a deal and the later it goes, the better it may be for the green and white as someone will want to make an offer where time won't allow another team to step in. The Riders may be on the clock now, but I can't see them being there when it comes time to begin on May 10. There is the danger no one wants to pay the price the team will ask, but if there is multiple interest, I am sure someone will make a deal which the Riders will accept.

I'm not sure, but if the Toronto Raptors were to play Game 1 of a playoff series against the U of R Cougars, the Cougs might win. It didn't take long to see in Game 1 Saturday against Indiana that Kyle Lowry and Demar DeRozan were not their regular season selves. The Raptors stunk out the joint in their playoff opener much like they have the last two years. The team simply can't allow their best regular season ever to translate into another first round exit. If it does, heads will roll and bodies may move. One of those heads may be head coach Dwane Casey. Game 2 is a MUST win for the Raps.

During the course of the NHL season, we received many games on Sportsnet via the NBC Sports Network. So can Sportsnet please tell me why when it comes to the playoffs, we are getting team feeds and not a national feed. There is no need to give us homer announcers and team feeds during the playoffs. That is extra-cheezy Rogers! That being said, Dallas analyst Daryl Reaugh may have had one of the best lines going when he stated during a lengthy review on what was a highly questionable goal by Dominic Roussel in Game 2 of the Stars-Wild series. While we waited, Reaugh said "Sometimes when your options are limited, you gotta pee in the sink". PRICELESS!  For what its worth, that call allowing the goal was in my mind horrible.  Like it is in football with a catch, sometimes I just don't know what constitutes a goal and what doesn't. I didn't think Andrew Shaw's goal in Game 2 would count due to goalie interference and it did. I didn't think Roussel's goal would count and it did. Baffling, confusing and frustrating.

To the people at Tim Hortons. Please, please, please take that ad off the air with the coffee cups being found in the garage. This just shows Dad is a hoarder and that creepy look he gives at the end of the ad as he is about to resume his addiction is just a tad bit terrifying. Who approves that crap?! Then again that could be said about a lot of ads both on radio and TV these days.

Johnny Manziel is no longer a joke. He needs help! His football career is over, and I have to wonder if he will still be around by the time next season kicks off. What a waste!

That's all I got. Have a great weekend!!

Pats atmosphere was off the charts. The fact the game was sold out Friday is a testament to Regina hockey community.

Without a doubt, you trade the pick. You can find Canadian o-lineman all over the place.


Jones and crew should be doing their homework on that Smith kid from Iowa. I am guessing he wants an NFL shot and will likely get it either via free agency or the draft. He is a prototypical CFL receiver. If Jones thinks they can wait a year for this guy than take him as you may have that stud receiver you haven't had since Dominguez.

If it is felt he won't play CFL for quite a few years if ever, then trade the pick.

I wake up every morning go to ESPN.com and wonder if the headline will read Manziel is dead.

Connor Hobbs has elevated his game so much in the last month. Washington has themselves a player and maybe two if Colby can get his game back. Don't know if the Pats win Tuesday, and I doubt they beat Brandon, but this has been fun.

What is worse? That Tim's ad or puppymonkeybaby?

Puppy-monkeybaby the worst ad by a country mile. Hobbs is nearly NHL ready in my mind and he's only 18. I also wake up every day expecting Manziel to have overdosed.

Ya, you have a good weekend too Scruffy.

O'Day ???? Isn't he in charge of the Roughriders food and beverage sales nowadays? He who begged Mr Jones for a job should be counting his stars he's still in the loop.