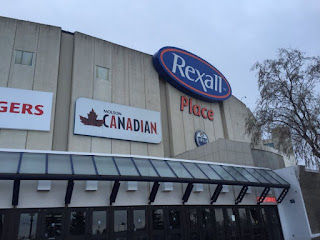 Call it the Northlands Coliseum, call it the Skyreach Centre or call it Rexall Place, the home of the  Edmonton Oilers has always been a special building for me to visit.

I was an Oilers fan before May 19, 1984, but less than a month before graduating, I made my first trip to the building on 118th Avenue in the Alberta capital to watch Game 5 of the Stanley Cup final between the Islanders and an Edmonton team poised to win their first ever NHL championship.  There was plenty of activity happening outside the rink, but I wanted to get in. I wanted to see a building I had seen so many times on TV.  At that time, the banners weren't hanging because many of the players whose numbers have now been retired were doing their thing on the ice.  I never imagined my first trip to the Coliseum would be the night the Oilers won their first Stanley Cup and like everyone else in the building that magical night, I got caught up in the emotion of it all. Seeing the Stanley Cup get presented is a very special thing, and even moreso when your team is the one getting it.

Since that May evening, I have been back at Rexall many times. I have been there as a fan, and I have been there as a member of the media.  I don't know how many visits I have made, but I have seen some of hockey's best play in that barn.  Besides the Oilers, I have seen the likes of Sidney Crosby, Steven Stamkos, Alex Ovechkin, Mike Modano, Denis Savard and Jaromir Jagr play in the building. I have been to a battle of Alberta, I was in the building when Wayne Gretzky had his sweater retired and I was in the building when Wayne set the all time record for points scored. I have been to Van Halen, I have been to Bon Jovi, I've been to Bryan Adams and I've been to other events as well.  Working in Peace River, Alberta, I always made sure a lot of my treks to Edmonton ended with me on 118th Avenue for something whether it be sports-related or not. There may even have been a trip or two to the Forum Inn for some beverages and entertainment.

This past January I went back to Rexall one last time. OK, I would have gone back had they made the playoffs this year, but realistically after a loss to the Florida Panthers I knew that was it. One last walk around the building, one last look at the banners that signified the glory days, one last picture at the Gretzky statue, one last overpriced beer or three.  One last time to remember the memories I have had in that building on 118th Avenue.  During that trip in January, I also got a great look at where new memories will be made for me and many other Oiler fans as Rogers Place will soon be a reality.  I can't wait for my first of what will hopefully be many visits to that locale as well.

The Oilers will finish things off tonight against Vancouver. Despite what has been another terrible season on the ice, I wish I was there. One more beer, one more walk around, one more opportunity to look at the banners that hang high above the ice surface, one more opportunity to soak in the game-day atmosphere, one more chance to be in a building I fell in love with on May 19, 1984. The team will bring out many players to celebrate the building and the history after the game is over. There is no doubt I will be watching.  When the lights go off, that will be it.  Yes, other events will be held in there, but I am guessing I won't be a part of them. 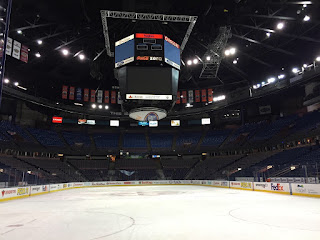 Rexall Place means a lot to this blogger and while I am sad to see it go, I know better things are on the horizon with one of the nicest arenas in North America soon to be the team's new home,  I might as well start getting used to it, because while I am sure it will be emotional to see the final scenes and hear the final sounds tonight, it will be nothing compared to the last game at Mosaic Stadium.  Farewell Rexall Place and thank you for the good times (even on the nights when the Oilers lost which lately was quite a bit). I have had many fine moments with good friends in that building on 118th Avenue and it will always be a part of my sports experiences that I will cherish.

The nostalgia will be off the charts tonight. Have you seen the list of players coming back?


Just hoping they put in a MUCH better effort than they did against Calgary Saturday. The Oilers have to win the last game at Rexall! With all of the greats there, it should be a night to remember in another season to forget.

Hey Mitch, do you remember when they used to have the "shower" on stage at the Forum Inn?
Oh, the memories.