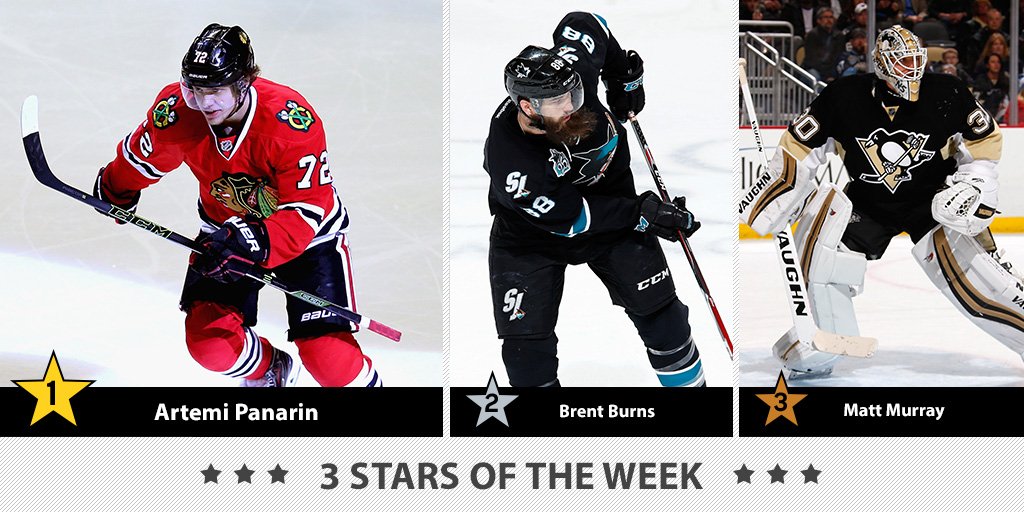 FIRST STAR – ARTEMI PANARIN, LW, CHICAGO BLACKHAWKS
Panarin led the League with 3-5—8 in three outings as the Blackhawks (46-26-7,
99 points) won two of three starts for the week to clinch a berth in the 2016 Stanley Cup
Playoffs. After being held off the scoresheet in a 4-1 loss to the Minnesota Wild Mar. 29,
Panarin registered consecutive four-point performances to close out the week: 2-2—4 in
a 5-4 overtime win over the Winnipeg Jets Apr 1 and 1-3—4, including the game-winning
goal, in a 6-4 win over the Boston Bruins Apr. 3. Per Elias, Panarin became the first
rookie in Blackhawks history to record consecutive four-point games and the first rookie
on any team to do so since Capitals forward Nicklas Backstrom in 2007-08. Panarin
leads all NHL rookies in goals (28), assists (44), points (72) and game-winning goals
(seven).

Burns finished second among all scorers and first among defensemen with 1-6—
7 in four games as the Sharks (44-29-6, 94 points) gained six of a possible eight
standings points. Burns began the week by notching one goal and one assist in a 5-2
win over the Los Angeles Kings Mar. 28. On Mar. 29, he recorded two assists in a 4-1
victory over the Vancouver Canucks and added two assists in a 4-2 loss to the Canucks
on Mar. 31. He finished the week with one assist in a 3-2 shootout win over the Nashville
Predators Apr. 2. Burns leads all defensemen with 27 goals this season and ranks
second among blueliners with 74 points.

Murray went 3-0-0 with a 1.95 goals-against average, .929 save percentage
and one shutout as the Penguins (46-25-8, 100 points) recorded four victories for the
week to extend their overall winning streak to six games and move into second place in
the Metropolitan Division. Murray began the week by stopping 26 shots in a 5-4
shootout victory over the Buffalo Sabres Mar. 29. On Apr. 2, he stopped all 24 shots he
faced to record his first career shutout, a 5-0 win over the New York Islanders. He
finished the week with a 28 save effort in a 6-2 victory over the Philadelphia Flyers Apr.
3. The 21 year-old native of Thunder Bay, Ont., has appeared in 10 games for the
Penguins posting a 7-2-1 record (1.88 GAA, .933 SV%, 1 SO), including five
consecutive wins.