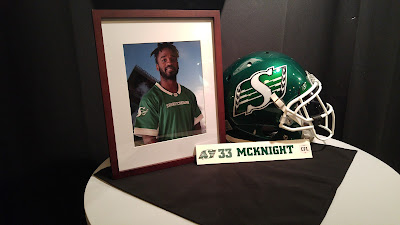 Joe McKnight's funeral had a beautiful New Orleans feel to it Monday, with a brass band playing as several of his former New York Jets teammates carried out his casket after a stirring, emotional ceremony in front of nearly 1,000 loved ones and members of his hometown community.

"You think about teammates and what that means. It's an extension of family. You become family," former Jets linebacker Bart Scott said. "You're here to support him as an extension of his family. Support for his son, who's gonna need guidance and memories and stories of the type of man that his father was."

McKnight, a legendary high school football star in New Orleans who went on to play running back for USC, the Jets, the Kansas City Chiefs and in the Canadian Football League, played three seasons in New York and clearly left an impact.

"There's a brotherhood and a camaraderie that we shared," Sanchez said. "And so it's tough to lose someone like that. So we just wanted to show our support."

"He was a brother to me," said Scott, who said he vacationed with McKnight and their children played together. "It was a tough loss. Joe had the ability to make everybody feel like he was your best friend. He was a caring, thoughtful, cool cat.

"Stepping in front of the church, it really just got real. The emotions start to come, and you realize that you really lost somebody close. We have a very tight-knit fraternity. It's gonna be a tough one to handle. But what makes it easier is that we have each other to lean on. Everybody's taking this pretty hard."

McKnight's high school coach, J.T. Curtis -- a local legend in his own right for overseeing the football powerhouse at John Curtis Christian High School -- said Monday's ceremony was uplifting, and he hopes the message of having Christ in people's hearts will resonate in a community tormented by gun violence.

"If anything comes of this, I hope that we will come to a position and a place in our country, in our community, that we're gonna recognize we've gotta change," Curtis said. "We cannot continue to have the same behavior repeat itself over and over again without the leaders in our community, in our schools, to be able to change people's lives.

The Saskatchewan Roughriders were represented at the funeral by Chris Jones, John Murphy and a handful of players.

Meanwhile in Regina, the football club held a 30 minute memorial service attended by staff and players, Team chaplain Jared Lacoste presided over the service and told a story about a conversation he had with McKnight --- the only one he had, but it was one that stuck with him for a variety of reasons. Lacoste said the Riders only received a small sample size of what McKnight was all about because he wasn't a Rider for long, but he was kind, thoughtful and well-respected.

Those sentiments were echoed by fullback Spencer Moore who said he knew how good of a player he was on the football field, and he was just as good a guy off of it as well. Moore also recollected how at the end of the year, McKnight said he liked it in Regina and would like to explore staying here year-round.

(With files from Associated Press)

Very classy move by Riders to do this.

Classy Football Club, classless fan base as evident of nary a family condolence conveyed via this blog site. How quickly they forget and move on.