Madani on latest black mark for CFL and its officials 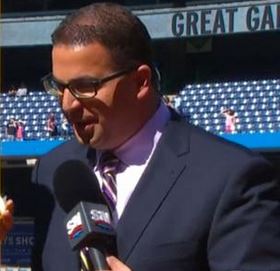 This morning was business as usual for Karen Kuldys. Her alarm went off before dawn at 4:30 a.m. She got up and went to work at A&W.

This morning, the bigger question is how – or if – Ricky Ray slept last night. You’d have to think the Argos medical staff kept him up until their flight in the wee hours of the morning. He had to have suffered some kind of brain trauma on that despicable, ugly blow to the head from Cory Johnson late in the fourth quarter.

A long-time team executive texted me after the play: “One of the worse (sic) cheap shots I’ve seen.”

He saw it, you saw it, Chris Cuthbert called it, hell, Randy Ambrosie couldn’t have missed it from the executive suite a mile above the play. Yet… yet, another game and another series of blown calls affecting the game’s result and the health of a league’s marquee player.

Was there a peep from the CFL office last night or this morning? One of the last Tweets from the league’s PR director came Thursday and it was about his favourite beers, and nothing was posted after halftime. So, then, back to business as usual for the CFL: head in the sand, hoping the furor will go away with a doubleheader on tap this evening.

Will there be accountability for what happened in Winnipeg? For missing the Johnson hit? For screwing Karen out of a million dollars? For not knowing what down it was, or where the line of scrimmage was, after getting another pass interference call wrong in the end zone?

The incapability of CFL on-field officials has reached the point where players are no longer protected on the field, contradicting the longest standing drinking game the league has. Think how tipsy you’d be if you took a sip every time you hear or read someone from headquarters declare: “player safety is paramount to us.”

It isn’t and it can’t be. Not when Ben Major, promoted to referee this season by Glen Johnson, misses not one but two hits to Ray’s head in the final minutes of regulation. Not when the league went out of its way this winter to give the Argonauts the most accommodating schedule possible, putting other teams (see Ottawa) in a dangerous, disadvantageous position (see three games in 11 days in three different cities) that proves player safety is far from paramount to the RedBlacks.

Understand the politics at play here: the CFL demoted Murray Clarke from referee to field judge, in large part because he missed obvious roughing the passer calls. Protecting the quarterback is a point of emphasis at all levels of football these days, after all, and to the league office that just couldn’t be tolerated.

Now enter Ben Major, Johnson’s handpicked selection. What will the consequence be today, Karen’s million dollars missed notwithstanding? If you’re guessing very little, you probably win the prize. Not the pots and pans that Kuldys first thought were coming her way, either.

Thursday was another opportunity for the CFL. With apologies to NBA Summer League, it was the only pro sporting event being televised in North America. This was a chance to showcase what this game was all about. It was a pretty entertaining get together: two CFL neophytes continuing to electrify on kick returns; Justin Medlock cementing himself as the best kicker in the league; Weston Dressler and Andrew Harris continuing their dominance in Winnipeg’s offence.

And yet, by night’s end, there was Ray getting crushed on a hit – that should merit a suspension – where there was no flag thrown; then the kick return touchdown, that could have become the goodwill story of the season, negated by a flag that should never have been thrown.

Ray’s significance to the Argos can’t be understated. So much so that before the game, Marc Trestman told Terry Koshan of The Toronto Sun, “the rest of us are not as important as him.” At the time of this column, the Argos were flying home from Winnipeg. The team had no update on Ray’s status.

Some believed Ambrosie’s first big test as commissioner was providing the proper discipline on Will “Smith” Hill, who grabbed an official during a game last week. In reality, the new commish knows the real crisis in his league right now. He must deal swiftly with officiating and the command centre and what is happening before his very eyes. People’s livelihoods are on the line with wins and losses. Players’ lives are on the line when they get clubbed in the head. At the very least, a flag could be a deterrent.

Kuldys got her 15 minutes of fame, #WhatAboutKaren trending nationally on Twitter. She went to work this morning knowing a $25,000 prize pack is coming her way.

Ray’s health is not as certain. Nor should status quo with the CFL officiating department. Even Karen Kuldys knew that when she left for A&W in the darkness of Friday morning.


I can't disagree with this. Say what you want about Madani and his love/hate of CFL, but he has gotten this right.

This article would have more clout if it was authored by anyone but Madani.
His mission for years is to destroy the CFL and I can't help but wonder who made him God?