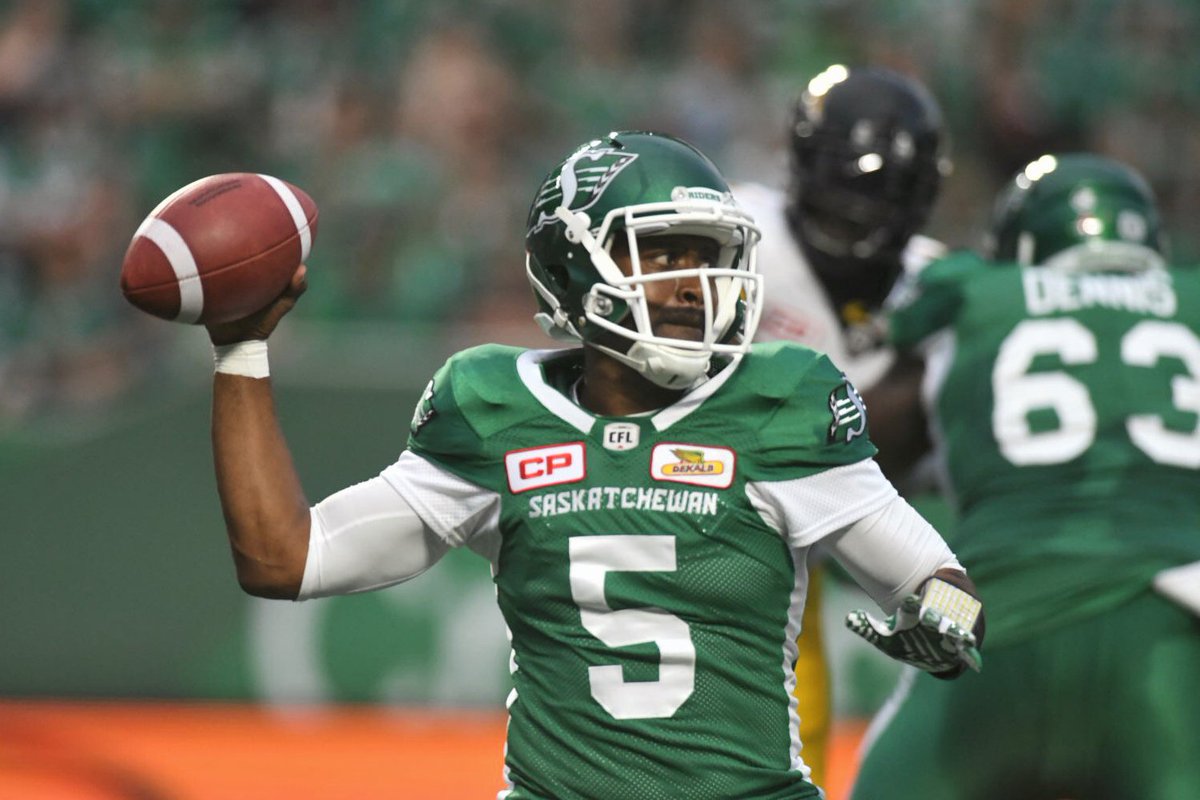 VICTORY!! - It's not a season-changing win, but it is a win and that's the most important thing. In a game the Saskatchewan Roughriders had to have, they came out firing and beat the Hamilton Tiger-Cats in a game where frankly the score flattered the visiting team.

I couldn't have been the only one filing out of Mosaic Stadium saying that Hamilton team looked bad.

CKRM's Michael Ball made the statement on the post-game show that he thinks Kent Austin won't last the season in Hamilton.  I think that may be stretching it, but it is obvious Austin and company have some work to do. A lot of work

Here are some thoughts on what went down:

--The most important part of the football game was likely the Riders second possession.  There is no doubt everyone in the ballpark got real quiet when Justin Rogers took a Kevin Glenn pass 110 yards the other way. A team that was fragile enough having lost the first two in tough fashion did not need that to happen.  Glenn came right back and moved the team 76 yards on 9 plays to re-take the lead and regain control.  While Hamilton did stay in the game longer than they should have, this drive went a long way to the win.

--The Riders dusted off the playbook and got the running game going. With that offensive line, how can you not tell the hoggies to get dirty and do some run blocking. Cameron Marshall had a couple of big runs to keep the Hamilton D on its toes and give the offence a more balanced look to it.

--Were the Riders that good or was Hamilton that bad? There weren't a lot of positives as far as the Ti-Cats were concerned.  There were a bunch of guys on that team I had never heard from.  They almost resembled the 2016 Riders.  There are some players there, but we don't know who they are and I don't know if Austin does at this time.  It takes nothing away from what was a big win for the /=S=/ going into the break.

--What was Hamilton D-back Will Hill thinking?  It is safe to say Randy Ambrosie's first day will be marked with what should be a suspension.  Say what you will about the officiating, but you can't put your hands on them the way Hill did. There has been some suggestion he grabbed the ref to show him what was happening.  That's not a valid excuse for that act.  He should get multiple games, but this is the CFL so who knows.  Ambrosie can take a solid first step with a harsh punishment here.


WEEK 3 CFL THOUGHTS -  Should there be some panic in Ottawa over the fact the REDBLACKS are 0-2-1.  One of those losses and that tie did come to Calgary, but the loss to Toronto should raise some eyebrows.  Has Marc Trestman turned around the Argo fortunes so quickly or is Ottawa not as good as we thought.

Do the Alouettes need to stretch it out. I didn't see all of the BC-Alouettes game and I did see Darian Durant throw some long passes, but it seems as if their offense is designed on those short 5 to 10 yard passes with the hopes of the receiver getting a block or breaking a tackle to create a big play.  Durant has not been what the Alouettes were expecting three games in, and one could certainly say Chris Jones did know what he was doing when he set the QB adrift.  I think we can all agree Glenn is playing infinitely better than Darian at this point in the season.

Who in Montreal thought SJ Green couldn't play at a high level anymore? That person was flat out wrong.

After wins in Toronto and Montreal, BC is in Hamilton next week as they continue this Eastern excursion. When was the last time a Western team played three straight games at Eastern venues?  That is something that should really benefit the Lions moving forward as they get a majority of their games on the other end of the country over with.

Once again when the Stampeders start to move the football, they are tough to stop. That will be the task for the Riders in two weeks.  Are the Bombers now what we thought they were one week ago?

There is no reason to complain about the games three weeks in. We have seen some entertaining contests which is nothing but good news for the league as a whole.

BASEBALL AT THE BREAK -  Major league baseball takes a hiatus for most of the week as the All-Star game festivities will go in Miami with the game going Tuesday night.  I don't think it would come as a shock to say the story of the first half has been the play of Aaron Judge of the Yankees and Cody Bellinger of the Dodgers.  Both are basically shoo-ins for rookie of the year, and both could be the MVP of their respective leagues as well.  The two of them have been amazing.

As for the best team, is it the Dodgers or the Astros.  Both have already achieved 60 wins.  L-A has the best pitcher in the game in Clayton Kershaw, but Houston has a lot of young talent like Carlos Correa, George Springer, Jose Altuve and others.  It is far too premature to say we will see a Houston-Los Angeles World Series, but that would be a lot of fun.

While those two teams can fight it out for best team at the break, I think it is safe to say that after winning the World Series last year, the Chicago Cubs can have the honour as the most disappointing.  The Cubs, who gave up 10 in the first Sunday to Pittsburgh, are two games under 500 and five and a half back of Milwaukee.  The Brewers may be the most surprising club in the majors at the break.  For the most part, the Cubs have the same lineup as they did last year, but the magic has disappeared for whatever reason as the pitching staff that was so dominant last year isn't even close to being that way this year and the hitting at times has vanished.  That isn't a formula for repeating.

NBA SALARIES - If you didn't know it before, you found out this week NBA salaries are a little over the top.  Kyle Lowry signed a contract with the Raptors that will pay him 30 million a season. Lowry isn't even one of the top 10 players in the NBA.  It comes on the heels of the NHL MVP Connor McDavid signing a deal that will pay him 12 and a half million.  Who is worth more, Lowry or McDavid.  Then consider James Harden who signed a deal with the Houston Rockets that will see him get 228 million over four years. It is obvious the NBA has to put the reins on salaries, but because it has gotten out of control.  They could walk out and miss seasons and I wouldn't care. Somehow I think a lot of sports fans would feel that way too.

That's all I got. Have a great week

It wouldn't hurt my feelings if the NBA had a lockout or walkout that lasted FOREVER.

A nice win for the Riders. Not sure who will be the first coaching casualty of the season. My money is on O'Shea or Austin. I expect Austin will throw one of his assistants under the bus to save his ass. O"Shea will be gone before labor day.


Anyone watching that game who saw what the Riders did in the first two games had to be going Uh-Oh after that pick six. The team last year would have folded after that and Hamilton would have won by two touchdowns.

Glenn brings a calmness to the huddle and tremendous composure. He isn't the flashiest QB in the league, but he is effective. He wouldn't have bounced around the CFL the way he has if he wasn't.

He isn't the long-term answer (Williams or Franklin), but he can win us some games this year and keep us competitive.

Ballsy may be right. That was a horrible effort!

When you got a guy like the NBA's Lowry almost making the same in one season as every player in the CFL combined (500 players +), you have a problem NBA.