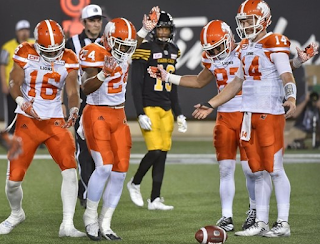 NEW NUMBER ONE ON CFL LADDER  -- Ladies and gentlemen, boys and girls, for the past few years there has been no denying the Calgary Stampeders have been the best team in the CFL.  Yes. they aren't the defending champs thanks to Ottawa in last year's Grey Cup, but after what I saw this past weekend, they are no longer atop the CFL throne.  When this week's power rankings come out, I would not be surprised to see the BC Lions atop the pack.

Say what you will, and yes Edmonton may have a claim to that #1 spot as they are the lone unbeaten, but BC is the top team after four weeks if you ask me.  Playing three straight games out east and winning all three of them is huge. To cap it off with Travis Lulay throwing for over 400 yards shows you the Lions can do it with their number 2 quarterback.  It is not known how long Jonathan Jennings will be out of the lineup for after injuring his shoulder, but if he is out for a while the Lions can rest easy knowing Lulay can do the job.

As for the Stampeders, well they showed us a thing or two as well.  First off, let's be clear. This team is not as good as last years. At least not yet.  They were a fortunate call from getting a tie in Ottawa and they didn't deserve to win in Montreal. There is still a long ways to go in this season, and yes they will be in a growly mood when they play the Riders, but we know they don't like playing Saskatchewan in MacMahon because of the tractor factor.  I'm guessing and hoping Chris Jones will be looking at the film of the Alouettes game and the first half of last year's Grey Cup to see what can be done to confuse the MOP.  I'm not calling for the upset, but I like the Rider  chances a little more after seeing what transpired this week.

Those chances might go up a little more if the league decides to hand out some further discipline to Jerome Messam. After getting kicked out of Friday's game for what was a stupid play, would the CFL suspend him? I'm guessing the answer is no, but who knows! This is the CFL after all!


AMBROSIE GETS AN "A" --  CFL Commissioner Randy Ambrosie showed us Friday he gets it.  Ambrosie was in Winnipeg Thursday night when a PR stunt blew up in the league's face.  The penalty that shouldn't have been called, and resulted in a Winnipeg woman losing one million dollars had headlines across North America. Ambrosie realized this, and he acted.

He, and the league, turned what could have been a PR nightmare into a positive by awarding Karen Kuldys and her family a trip to Grey Cup. It's a small way of saying you're sorry for the officiating and the fact they jobbed her out of the cash she deserved.  The Bombers, the CFL, Safeway and Air Miles also hopped on board to make it better for this woman and themselves.  Without admitting the call was wrong, the league and its partners gave what was a bad story for the league a good ending.  Would Jeffery Orridge had done this? I don't even know if he would have been aware of it if the truth be known.

I like the way this guy is starting out, and CFL fans should too.  He could have taken the "oh well" attitude, but he didn't. He was proactive on what took place, and he should be recognized for that as should Wade Miller and the Bombers.

Some asked if the Riders would do the same thing if they were in that position. Absolutely!  Wayne Morsky and Craig Reynolds might have done something before the CFL did. It likely would have been the same gift as what the Bombers were giving, but they would have done it.  Despite what some have said, the Riders still realize how important its fan-base is and what they mean to this organization. The team does what it can to look after its fans. Sometimes it can't happen, but most times it does.

RUN THE BALL AND GOOD THINGS HAPPEN -   The lone unbeaten team in the CFL are the Edmonton Eskimos.  During Saturday's game, TSN's Derek Taylor, who you can hear every Wednesday on the Sportscage, sent out a tweet showing the pass to run ratio.  The Eskimos are the closest to 50-50 as they pass 58 percent of the time.  Running the football has made Edmonton a little more dangerous.  We saw what happened with the Riders offence against Hamilton when Cameron Marshall started touching the football. Yes, the CFL is a pass-happy league, but "W"s might be more achievable by "pounding the rock"!


CRYING IN YOUR BEER -  I just want to make sure I have this right.  There are one group of Rider fans who are upset over the beer prices at Mosaic Stadium.  There are another group of people upset because they can't drink craft beer.  Is there a group out there that wouldn't pay the high price for a craft beer? You can get Great Western beer at the Brandt Centre during Pats season, but you can't get a Molsons product. Damn you Pats, you don't sell Molson products. How dare you!! The Riders moved to Pepsi this year from Coke. Are Coke fans outraged? I'm not the beer connoisseur that others are, but give me a beer and most times I'm happy.  It can be a Coors, it can be a Kokanee, it can be a Mus Knuckle, something from Rebellion or whatever.

FEDERER -  Roger Federer's legacy grew a little on Sunday as he won his 8th Wimbledon mens singles title.  Federer has to be getting up there as one of the world's greatest athletes if he isn't already there.  He went through the entire tournament without losing a set.  That is beyond impressive.

FLOYD & CONOR - What a circus the hype between Floyd Mayweather and Conor McGregor has been as the two criss-cross the continent promoting their August fight.  It has been entertaining to watch these two snipe at one another, but it was a WWE feel to it because the two are flying from stop-to-stop in the same plane.  The hype is worth following because it gives one a chuckle.  The only chuckle from the fight will be those who pay for it.  I just don't see this being worth the oodles and oodles of cash both are going to get.  I also think McGregor win or lose will want Floyd in his domain and will want another fight in the octagon so both can get another huge pay-day. No thanks!

THE FUTURE LOOKS GOOD -  Team Saskatchewan was oh so close to winning gold at the 2017 Football Canada Cup losing on a last second touchdown to Quebec by a score of 10-7. Saskatchewan has seen many good players move on to the next level with more ready to move after a year of university and college ball.  The future looks good.  One has to wonder though when Rams DC Sheldon Gray (head coach of Team Sask) and Rams OC Mark McConkey are going to get a call to the next level.  That statement probably has Rams HC Steve Bryce going SHHHHHHHHH! Good programs have good people!


I'm with you on BC, but I can't see the league suspending Messam. That wasn't anything you wouldn't find in any other games.


Federer is one of the greats already. With every win, he just inches closer to being the "GOAT" in any sport.


Firing Johnson would give Ambrosie an "A plus"!

Beer is beer. These craft beer owners just need to get over it and realize their product isn't as important as they think it is.

Thanks for my Monday morning fix Scruffy.


Ambrosie seems to get it. He has been put into a couple of fires early on in his tenureship, but he hasn't failed. Not yet at least. Maybe the CFL finally did something right.

Running the football happens in the CFL once the weather gets colder. Obviously, it works at the start of the season just as much as it does at the end. Ask NFL coaches how important the run is.


Perhaps you have been drinking too much craft beer if you think BC is better than both Calgary and Edmonton. Just sayin!


Can someone tell me why the craft beer people think their product should be in the stadium? Talk about a sense of entitlement!

Hey Beer crafters how many numbers on the cheque to get your product in Mosaic? I'm thinking 7 is a good start. Your association sounds like a bunch of self entitled NDPer's