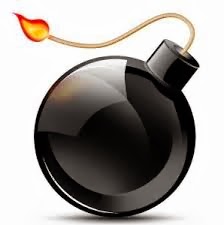 --Are the Riders a ticking time bomb? Is everything going to explode if they don't walk out of their brand new home a winner on Saturday night when the Hamilton Tiger-Cats come to town?  Let's just put it this way, if they lose by 1 or 100, it won't be pretty around here as the team takes its first of two bye weeks. I know...thanks Captain Obvious.

Assistant GM John Murphy says it is the most important game in the history of Week 3 games. Yeah, I think he is overstating it a little, but despite two tough losses there is a lot of frustration, and a lot of angst.  From the fans to the coaches to the players, a win is what is needed.  The green-and-white should already have one, but they don't.  At the end of the day, that is their fault.  Yes, those little details that cost them games against Montreal and Winnipeg can't be repeated.  Do I think the Riders can take advantage of a Hamilton team that is also flailing? I believe they can. If they can't, this heat we are experiencing will be nothing compared to the heat he organization will be feeling.

--What happened between Jonathan Newsome and Chris Jones this week to end Newsome's time in Riderville? It's a question many are asking, but Jones isn't saying. He has every right not to, but there are many to question why that is.  Newsome wasn't the team's top defensive player, but he was an asset. I have to think this is an issue that reared its head on Tuesday when the team came back after the Winnipeg game. Did something boil over after the game Saturday and the two sides couldn't come to a resolution? While Jones doesn't have to tell us what went down, I think in this case he could have said more than it was just "a difference of opinions".

--Good on Jones for giving Tyler Crapigna a vote of confidence.  Let's hope that is rewarded. Crapigna is 7 for 9 on field goals, but people are remembering the two misses for obvious reasons. Crapigna has made big kicks before, and he will again. He did it last year.  The kid can kick and is an asset for the team moving forward. I don't know if he would have gotten that vote last year, but that was then and this is now.

--Did the CFL score a touchdown with Randy Ambrosie? I hope so!  The former player checks off all the boxes the league wants. If he gets the co-operation and the support of the nine teams, he may be able to do some things to increase the league's profile. He said all the right things in his introductory news conference Wednesday.  One of the things I liked about what he had to say was the league needs to puff its chest out more and let people know how great they are, not just in Canada, but around the world.  Despite what the league may tell you, they don't do a very good job of marketing themselves in the off-season.  Other pro leagues don't go dark once their season ends.  They and their teams do what they can to stay in the conversation. The CFL doesn't seem to want to adhere to that policy.  If they want to be a big boy that changes.  If they don't, nothing changes and the perception that they are just a minor league continues.  Work with your clubs in the off-season, work with your TV partner,  develop an off-season marketing campaign. Do something!

--You can now buy items from the old Taylor Field. You can buy the urinals. WHO AND WHY WOULD YOU WANT THAT?  Having a piece of turf would be cool, but is there anything else you would really want to have.  I guess having part of your bench if you are a long-time season ticket holder would be OK.  I suggested CKRM should put a bid in for the Section 62 sign, but I truthfully don't know if there was a section 62.

--Try and try as they might, the CFL can't win sometimes. On Wednesday, they make the announcement of Ambrosie just after 9 AM. By the time 1 o'clock rolled around, the NHL and the Edmonton Oilers had stolen their thunder with the announcement of a Connor McDavid extension.  That is the story everyone most everyone ended up talking about, and the CFL was left on the side of the road again. Could the Oilers not have waited? Could the CFL not done the Ambrosie announcement earlier?  It is too bad to see the CFL get somewhat shafted again, but that is the way it goes whether it be unintentional or not.

--Speaking of McDavid, he gets 100 million dollars over 8 years or 12.5 million a year.  The CFL salary cap is 5.15 million per team. Let that sink in for just a while!  By the way, it says a lot about the kid when he leaves some money on the table and actually takes less than what was reported last week so that Edmonton can be a winner and not be under a cap crunch. Everyone I speak to in Edmonton says this kid is unreal and is so mature for a 20 year old. In this day and age where many athletes are "me" guys, it is refreshing to see.

--Don't tell me there isn't collusion amongst NHL GM's. You can't tell me some NHL team could put the pressure on Edmonton by signing Leon Draisiatl to an offer sheet. If Calgary or Vancouver did that, there would be a huge firestorm and it would really make the Oilers squirm as to whether or not to match it.  It's not happening though and that makes Peter Chiarelli's job a little easier.

--Nice try Marcus Stroman! Your diatribe about blisters and the baseball being used this year indicating there is something different with it resulting in so many home runs was simply a poor excuse. Did J-A Happ complain about the baseball after beating the Yankees Tuesday? Are guys like Clayton Kershaw, Chris Sale and Max Scherzer complaining about the baseball? No, it's because they can locate it where they want most of the time.  The fact you made the comments after a 4th straight loss meaning your team had been outscored 35-6 in those games had nothing to do with it right? You say you've never had blisters before so the ball is to blame? Please!  I've never bought  a Ferrari before either, but I guess that's the fault of someone else.

--Can we just refer to Genie Bouchard as this generation's Anna Kournikova.  The Canadian tennis player, much like the Russian, is easy on the eyes, but like Anna, Genie is more interested than modelling than tennis it would seem.  She's not the first, she won't be the last.  Things seemed to be going well for her when she got all the way to the Wimbledon final, but she seemingly has lost her desire somewhere along the way and is content with being a SI Swimsuit model and playing tennis as a hobby.  Somehow I think many guys are OK with that.

--That's all I got. Should be a great night for football tomorrow so enjoy it and hope this Saturday's ending is better than last Saturday's.

The Riders have been a mess since Darian got hurt in WPG in 2014.

Many warts were exposed, and corrections were attempted.

It is obvious Jones was not the right hire. At the time I thought it was, but the evidence shows it wasn't.

Get through this year. Get new blood in.


Nothing but positives when it comes to Ambrosie. The same was said with Orridge though. How he handles himself when there is a "crisis" will be key. Wish him all the luck though because he has a lot to clean up from Toronto to officiating to attendance to a lot more.


I can live with 0-2 because they weren't beaten soundly and maybe beat themselves. I will not tolerate 0-3 though with tough games coming after the bye week.

Whoever takes over the Riders after Jones is sent packing will inherit a worse team than Jones did. At least Jones had two non-stop motors in Chick and Dressler. Now there's no one gives a crap.