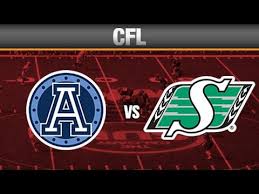 The column is called "Players To Watch", but perhaps "areas to watch" should be included in this as well.  Here are some things and players to look for when the Argos and Riders meet at what will be a toasty Mosaic Stadium this afternoon.

RIDERS O-LINE  -  After last week's effort, this is a no-brainer.   After three great efforts to start the season, Charleston Hughes and the Stamps d-line made the Rider o-line look bad last week.....real bad.  That group collectively is better than that and they know it.  It was a slap in the face to veterans like Labatte, Clark, Dennis and group. Yes, Toronto won't have Victor Butler and Cleyon Laing in the lineup which is a huge plus to the green-and-white, but Toronto still leads the league in sacks with 17. That being said, I expect a much better effort from them today. I think Kevin Glenn hopes for the same thing.

SECONDARY PLAY  -  How many times will Chris Jones and Marc Trestman throw the challenge flag today?  I hope we don't see a repeat of what happened in the 4th quarter of the BC/Edmonton game last night as Jason Maas and Wally Buono went fishing several times in the final 15 minutes hoping for a call.  Jones said this week the game could be a challenge fest because like Dave Dickenson is doing, the receivers will run into defensive backs in double moves in the hope of seeing a flag fly.  That isn't the spirit of the game, but coaches will use it to their advantage until something is changed.  It isn't fair for the defensive backs to play this way. I asked Ed Gainey on Friday if defensive backs have to knock receivers on their wallet off the line of scrimmage.  While he didn't disagree, he added you can look real stupid if you do that and miss.

SJ GREEN -   Who thought this guy was done?  The Argos receiver is a big reason why they are where they are in the East.  He will look to add to a nice start to the season that has seen him catch 31 passes.  He's also good for a highlight reel catch or two and some of his best have been just down the street at the old place. He is still one of the best in this league.

CREZDON BUTLER -  Butler has bounced around the NFL, but he makes his first start in the CFL today playing at the SAM linebacker spot in place of Sam Williams.  It is a position Butler has not played, but Chris Jones correctly informed people yesterday that the position is much like an added defensive back and if they put him on the roster as that, no one would bat an eyelash.. Butler will have his work cut out for him.

QUARTERBACKS -  It's not Brady vs Manning, but Ray vs Glenn features two quarterbacks who will be in the Canadian Football Hall of Fame and two quarterbacks who have thrown for 50-thousand yards.  Guys like this won't be around for much longer so enjoy watching them do what they do while you can.

COREY CHAMBLIN -  Say what you will about Corey Chamblin, but the record shows he was the head coach of the 2013 Grey Cup winning team. He was the man in charge on that magical Sunday night at Taylor Field. Yes, it did not end well for him, but he deserves a salute from Rider Nation today as he returns to the sight of his greatest football highlight.   I doubt the Riders will be giving him any kind of salute as ones weren't given to Dressler and Chick last year on their return, but should Corey's mug pop up on the scoreboard today, it would be nice to see those in attendance give him a warm round of applause.

No matter where you are and no matter how you tune it in, enjoy the game.