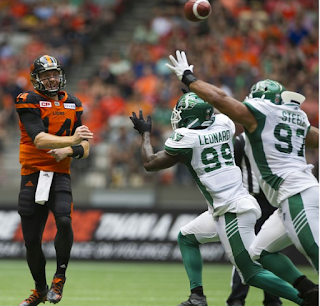 EPIC FAIL  -   What else can you say about what transpired on the turf at BC Place Saturday night? Hey, at least there were no challenges!!  That might have been the only positive of the night as a 30-15 score flattered the Riders.  The BC Lions were by far and away the better team as the Riders now decisively showed us they aren't capable of playing with the big boys----at least not yet.

There's no excuse for the latest 60 minute debacle we saw.  Travis Lulay and the BC Lions were ready for this game, while the Riders once again looked like they would like to be elsewhere. Perhaps some of them should be after this one.  We heard how the team was asleep at the switch in Calgary and how the message had been harped on them all week that a better start was needed. I guess that message didn't get through.

You had to have the feeling when Lulay hit Chris Williams deep down the sideline on yet another play this season where the secondary was basically invisible that it could be a long night. It was!

Who's kidding who, in the 3rd quarter, TSN was showing an ad for a movie and the phrase "A must-see horror experience". I thought TSN was critiquing the performance of the visiting team as I asked why is this a must-see? Besides, I saw that act in Calgary.

This was a chance for the green-and-white to show people they have the talent to compete. Instead, we are left wondering just where this team is with the thought process of are they really better than last year's squad becoming valid. The talent is better, but the effort and results aren't.  It is as simple as that.

They could have gone into Vancouver and come out with a statement victory. Instead, they made a statement of another kind and it isn't really a good one.  I don't know if they beat BC next weekend and really after an effort like that I doubt it. What I do know is win or lose next weekend, you would be a fool to take them to win in Edmonton.  Why would you after what you have seen on the road against Western Division opponents this season.

GLENN IS THE GUY - The 4th quarter performance by Brandon Bridge has some believing Air Canada should be the starter next week. PLEASE!!  Bridge played when the game was over, and BC had called off the dogs.  They didn't have some of their regulars in there. It was mop-up time. Tino Sunseri may have been able to do that. OK maybe not!  Bottom line is KG gives the Riders the best chance to win at this time and until they have been mathematically eliminated from playoff contention, there is no need to change it up if he is healthy.  Once it is apparent, this team is going to be missing the playoffs again then you can look at making a change. Until then, stop it.  You're smarter than that.

A TALE OF TWO TEAMS - The Winnipeg/Ottawa game on Friday night certainly was a snapshot of their season.  Winnipeg has won three of their four games by a total of seven points while the defending Grey Cup champs have lost their 5 games by a total of 13 points.  Despite what Henry Burris is saying, that's just bad luck.  As for Winnipeg, they are making the most of their opportunities and the record shows it.

THANKS BUT NO THANKS -  I understand Hockey Canada and TSN are in bed together, and I understand the three letter's need to show hockey, but I'm not watching this World Junior Showcase in Michigan going on.  Watching hockey on TV in early August in Saskatchewan is not for me.  If its the World Juniors, let's talk.  Yes, by looking at my Twitter feed it would appear as if Pats forward Sam Steel is impressing everyone. Good! Do it in Buffalo in late December-early January when the interest will be much higher for many.

CUTLER TO MIAMI -  HA HA HA HA HA!!!  Sorry Dolphins fans, but the arrival of the former Chicago quarterback shouldn't bring optimism.  I heard some this weekend saying this gives the Dolphins a chance to compete with the Patriots in the AFC East. Uhhhhhhhh no!  All this does is give the Patriots defence a chance to add to Poutyface's woes.  This is a 10 million dollar investment that I don't think will be worth it for the fish.

DON'T CROWN THE CHAMPS YET -   It would seem many are ready to say the Los Angeles Dodgers will be World Series champions this year.  There are still six weeks to go until the playoffs start.  As we saw last year, the best team has no guarantee of winning as it took the Cubs until extra innings in Game 7 to win it all.  Take nothing away from the Dodgers as they are stacked, but let's get to the playoffs first.  The National League playoffs will be compelling with the Dodgers, Nationals, Cubs (maybe) and the Rockies or Diamondbacks.

That's all I got.  Enjoy your holiday Monday!

Scruffy said, "Once it is apparent, this team is going to be missing the playoffs again then you can look at making a change".
Why don't you media type ever cut to the quick? It's already apparent to everyone that doesn't have a press pass.


Gave my ticket for Sunday to the inlaws. They can watch that mess unfold in front of their very eyes. I am staying at the cabin and coming back when I feel like it.


Those who think Bridge should start are the same people who likely didn't come prepared for the hot weather last time. WAKE UP!!

Dolphins win more games than the Seahawks this year

News flash to Regina, nobody gives a $hit about the riders!

Peter King's MMQB column today explains all you need to know about why Cutler is going to Miami.


Unless I'm living in California or Florida, there is no reason for hockey when it is like this outside.

TSN is so desperate for hockey, they would put on Timbits games!


This season is over Scruff. The sooner you realize that, the better off you will be.

Glenn gives us the best chance to win at this time…really. What are we going to win? Are you going to be saying that again when we're 2-7 at mid point? We're going nowhere with Glenn. FACT: no team ever has! Time get over this Glenn is our saviour thing.

Either one or both of our two young guys should be getting the minutes right now so that we can find out for sure whether or not we have a QB in the pair. Lets know now rather than after the season is over. Give each guy the chance to come off the mat and become the next DD, or not.