Jefferson Ready For Life As A Bomber 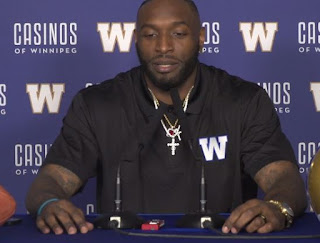 Willie Jefferson had options, the way you’d think a two-time CFL all-star with freakish athletic ability would have.

The quarterback’s worst nightmare landed in Winnipeg, Friday, saying it was pretty hairy acting as his own agent in free agency, there were so many teams that wanted him.

“Pretty much everybody,” the 28-year-old former Rider said. “Doing the things I’ve been doing the last two years, a couple of teams were really hot on my line, Winnipeg being one of them.”

“Matt was on my phone, heavy,” Jefferson said.

Little wonder, as the 6-foot-6, 245-pounder gave the Bomber quarterback fits last season, most notably with a 97-yard interception return for a touchdown in the Banjo Bowl.

Nichols convinced Jefferson this is a good place to live and work, a nice contract from Walters worth some $200,000 did the rest.

Even if trading green-and-white for blue-and-gold doesn’t come easy.

“When the conversations first did start, I was kind of hesitant to come this way,” Jefferson said, noting the rivalry. “But it’s a business. And then once I looked at their side of things, it really became clear which organization really was going after me the most.”

There’s also the fact Winnipeg is a contender, with another of the CFL’s top defenders at linebacker, in Adam Bighill.

Signed for one year, Jefferson says if he likes it, he’ll stay.

“Hopefully we can make something big happen.”

Like it or not coach Jones Haters, there were some Rider players that were only in Sask because of him. Now those players have left because Jones left.


Jefferson was a Jones guy. I won't be surprised to see him end up in Cleveland some day.

I'm a Jones hater and damn proud of it because it turns out everything I said about him came true.

CWS
I'm a O'Day hater and damn! DAMN!! proud of it because it turns out everything I about him is going to be true.