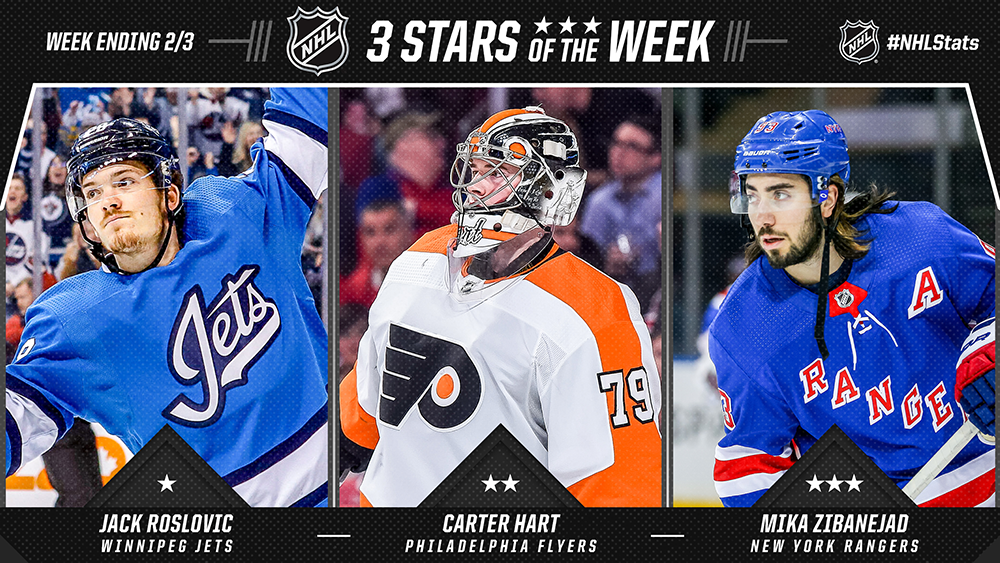 Roslovic tied for the League lead in scoring with six points (5-1—6 in 4 GP) as the Central Division-leading Jets won three of four starts to improve their overall record to 34-16-2 (70 points). He began the week by notching Winnipeg’s only goal in a 3-1 loss to the Philadelphia Flyers Jan. 28. After being held off the scoresheet in a 4-3 shootout victory over the Boston Bruins Jan. 29, Roslovic recorded one goal in a 4-3 win over the Columbus Blue Jackets Jan. 31. He finished the week by recording 3-1—4, his first career hat trick and four-point game, in a 9-3 triumph over the Anaheim Ducks Feb. 2. Selected 25th overall by Winnipeg in the 2015 NHL Draft, the 22-year-old native of Columbus, Ohio, is in his third campaign with the Jets and has posted 7-9—16 in 51 games this season.

Hart went 3-0-0 with a 2.27 goals-against average and .931 save percentage to help the Flyers (23-23-6, 52 points) register a perfect 4-0-0 week and extend the NHL’s longest active winning streak to seven games. He began the week by making 31 saves in a 3-1 victory over the Winnipeg Jets on Jan. 28. On Jan. 31 he stopped 23 shots in a 3-2 overtime win over the Boston Bruins and capped the week with a career-high 40 save performance in a 5-4 overtime victory over the Edmonton Oilers on Feb. 2. In doing so, the 20-year-old native of Sherwood Park, Alta., extended his personal win streak to six games, becoming the sixth goaltender in NHL history to record a personal win streak as long before celebrating his 21st birthday and first since Montreal’s Carey Price in 2007-08 (7-0-0).

Zibanejad tied for the League lead in scoring with 3-3—6 in three games, earning a point on each of the Rangers’ six tallies for the week. He was held off the scoresheet in a 1-0 loss to the Philadelphia Flyers Jan. 29 before rebounding with 3-1—4, including his second career hat trick and the game-winning goal, in a 4-3 win over the New Jersey Devils on Jan. 31. Zibanejad finished the week by recording his team-leading 13th multi-point outing of the season with two assists in a 3-2 loss to the Tampa Bay Lightning Feb. 2. The 25-year-old Huddinge, Sweden, native leads all Rangers skaters in assists and points with 20-30—50 in 51 games this season, one shy of his career-high point total set in 2015-16 (21-30—51 in 81 GP).
at 2/04/2019