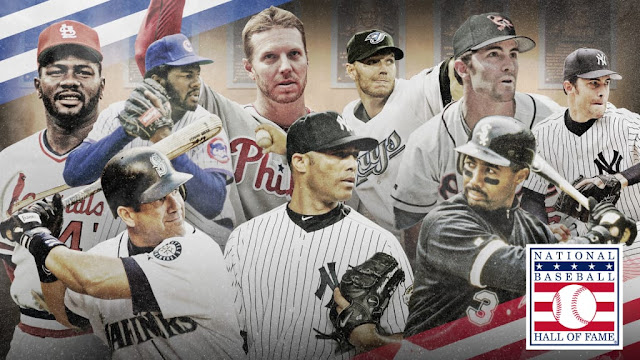 The great victories will be felt, as will one great loss.

In the vast field, there will be the tens of thousands of baseball fans braving the heat and the threat of rain. On the stage will be five men, the Class of 2019, whose realized dreams represent the evolution of the sport itself. And in the air, the spirit and the memories of one of the game’s most passionate pitchers will lend gravity to the grounds.

This year the celebration is a toast to commanding closers Mariano Rivera and Lee Smith, distinguished designated hitters Edgar Martinez and Harold Baines and sabermetrically-supported starter Mike Mussina. But it will also bring tears for the late Roy Halladay, whose widow Brandy will deliver an acceptance speech on his behalf.

The thought works in a literal sense for a central New York village blissfully set apart from the hustle and bustle, and, for the men being honored here, it works in a more metaphorical sense for the hours of batting practices and bullpen sessions that pave the way to a Cooperstown-worthy career.

In recent months, those hours have instead been devoted to the dreaded realm of speech preparation. Even Martinez, who is ordinarily a man of few words, had been shocked to discover his first draft came out to 20 printed pages. But after 18 seasons in the big leagues and 10 years on the Baseball Writers’ Association of America ballot, he had plenty of time to build up material.

“This is a process that I’ve been going through, kind of taking all this in,” Martinez said. “I wonder how it’s going to feel Monday when I wake up? I think that’s probably when it’s going to set in.”

For the Class of ’19, the magnitude of the moment might hit earlier. Not necessarily when they see the fans sprawled out in front of them, because they’ve all performed in front of large audiences before. Rather, it’s usually the much smaller crowd that will be seated behind them -- and this year a record gathering of 54 previous inductees is expected -- that usually conveys what it means to be a member of baseball’s most fastidious fraternity.

Rivera joins that company in a class all his own as the first unanimous selection from the BBWAA ballot.

But even he knows his place here.

“I’m a rookie in this thing, and [the previous inductees] are way ahead of me,” Rivera said. “I could never mention myself with any of them. I’m just happy I’m here.”

That Rivera appeared on all 425 submitted ballots says a lot about the progression of the BBWAA’s attitude toward the relief role, because even as clear a candidate as Rivera is, he likely would have had trouble batting 1.000 in earlier decades. Smith would know, having been held out of the Hall after 15 years on the ballot, before the smaller Today’s Game Era committee selected him last December and turned him into, in his words, “a 61-year-old rookie.”

Martinez didn’t wait quite that long, but, at 56, he waited long enough. And for he and Baines to go in together is a victory in the battle against those who don’t view the DH as a “real” position.

Meanwhile, Mussina’s induction is a testament to the advanced stats, like ERA+, that put a career that took place entirely in the AL East and predominantly in the so-called “steroid era” into proper context.

All of the above is part of the broader discussion of BBWAA voting practices, small-committee politics and the usual stuff we argue about each winter when the games aren’t being played.

But this weekend -- and especially Sunday’s salute -- is ordinarily just simple celebration, something those fortunate few who have their names called by the Hall get to share with their families.

“I had my fun as a player,” Baines said. “I want my family to enjoy this, because they didn’t see all the things that I saw. So this is all about family for me.”

For the Halladay family, this celebration is conflicting, difficult and certainly bittersweet. But the entire baseball world -- not just those gathered on the dais -- will be behind Brandy Halladay as she gives the speech the man known as “Doc” didn’t live to voice himself but earned with his indefatigable approach to his craft.

“I wish he could be here,” Rivera said. “He earned it, and he deserved it, and he gave us a lot of great memories. He’s a guy that was always giving his best.”

The Class of ’19 will give its best Sunday, basking in the crowd’s adoration, backed by a congregation of baseball greatness and blessed, we like to think, by the spirit of a member gone far too soon.
at 7/21/2019