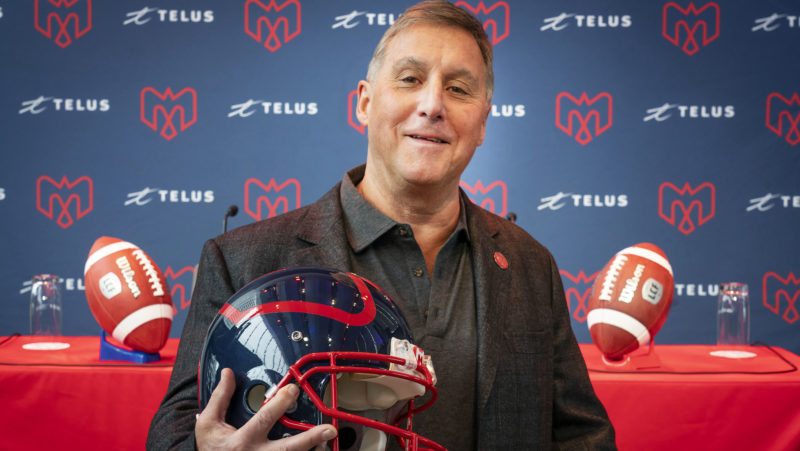 The Alouettes finally have new owners — and it’s a group that wasn’t on anyone’s radar.

Ontario-based entrepreneurs Sid Spiegel and Gary Stern were introduced as the owners of the Canadian Football League team Monday morning at a hastily called news conference at a downtown Montreal hotel.

In attendance were CFL commissioner Randy Ambrosie and Stern, who will serve as the team’s lead governor. Spiegel wasn’t in attendance.

Spiegel is the founder and chairman of the board of Crawford Steel, while Stern is the company’s chief executive officer.

While Stern said the group only expressed their interest in purchasing the team three weeks ago, he insisted their commitment is long-term.

“We love sports and grew up watching the CFL. This opportunity is my dream,” Stern said. “We won’t disappoint the fans.

“I promise Sid and I will fund the team, and this team will become a team for all teams to emulate,” he added. “We’ll be that model that all teams want to be. We bought this team. It happened fast. But I promise it’ll be a first-class operation.”

The CFL assumed control of the financially struggling franchise from owners Robert and Andrew Wetenhall at the end of May. In the ensuing months, Ambrosie is believed to have negotiated with numerous groups, including Montreal financial adviser Éric Lapointe, a former Als fullback; movie theatre mogul Vince Guzzo; Clifford Starke and brothers Jeffrey and Peter Lenkov, who reside in Los Angeles but originally are from Laval. It’s also believed Montreal-based Claridge Investment Ltd. was involved in the process at some point.

Ambrosie admitted the process was long and difficult because the business operation is in a challenging state. According to Ambrosie, the  other potential groups all had to find investors, whereas Spiegel and Stern did not.

Ambrosie said between seven and 10 groups were involved.

“We believe they’re the very best choice for the future,” Ambrosie said.

Stern said he hopes to have a new president and general manager in place by this Friday. He stressed the new president will be bilingual.

The league announced last Friday that Pierre Boivin had been relieved of his duties as Als president.

The Als, after firing head coach Mike Sherman less than a week before their opening game, went 10-8 in 2019 and made the playoffs for the first time since 2014. Khari Jones, the team’s offensive co-ordinator, replaced Sherman. It also marked the team’s first winning season since 2012.