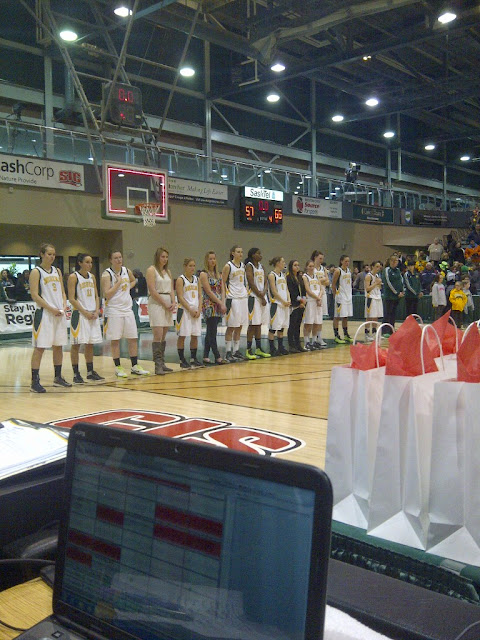 The University of Regina womens basketball team were a disappointed lot on Sunday afternoon as were many that filed out of the CKHS as what was a great 2013 CIS womens basketball championship ended on a sour note with the Cougars losing in the final. Take nothing away from Windsor as they were the better team on this afternoon, but I was left to wonder after the game what might have been. There were some shots that didn't fall that I saw go down many times this year and first half shooting from the foul-line was a little less to be desired, but you can't make excuses.

As the minutes ticked down to the game, an uneasy nervousness came upon me. I hadn't felt like that since watching the Riders in the Grey Cup. Sadly, I felt that same punch that I did when the Riders lost to Montreal because it was tough to see girls like Lindsay Ledingham and Brittany Read crying tears of sadness instead of the tears of joy that I think many thought they would see. I saw Lindsay after the game and I didn't really know what to say to her because you can't say "next year" when their university careers are done.

Take nothing away from the fact that this team got to a national final again and why national finals and conference finals have not been kind, this team gets there year after year after year. They are one of the top programs in Canada because of Dave Taylor and that isn't ending anytime soon, Taylor said as much after the game. If the opportunity arises to do public address for the team next year, I will have a front row seat to watching the likes of Kehlsie Crone, Katie Polischuk, Jennilea Coppola, Alyssia Kajati and others get this team to what hopefully is another appearance at the nationals and hopefully a much sought-after win, however, it won't happen at home.

I was so immersed in the tournament over the last few days that I didn't really keep track of what was going on in the outside world.  There were a couple of things though and some of them are tournament related.

--I have watched many Cougar basketball games--mens and womens--over the year. I don't think I've ever seen anyone have a better game than what Brittany Read had on Saturday night. 29 rebounds! That's unheard of! It has to be a CIS record, but I was told there is no national record-book and just conference ones. That should change in this day and age. You had to see it to believe it. It got to the point that St, Mary's almost just stopped trying to get a rebound because they knew Read was there. It was simply amazing to see.

--If CTV"s Molly Thomas decides she doesn't want to be a television personality anymore, she should get into singing. The host of the CTV Regina morning show belted out O'Canada at the CKHS before the Cougars game Friday and Sunday. The girl can sing.

--If you have never heard of Chris Dimas, you may soon. The 16 year old Reginan played at halftime at one of the games on the weekend. What a drummer and he's only 16! By looking at Rod's blog, it looks like he played at the Thunder dinner too. The kid knows what he's doing.

--Will canoes be allowed to park downtown? I'm starting to wonder after the latest bout of snow. I'm beyond sick of the snow. I know many of you are too. I'm tapping out, I'm saying UNCLE. Just get here spring!

--Nick Diaz found out what so many others have in the past. Don't screw with GSP!

--How many people from our fine province are going to Winnipeg for the UFC fight there in June. I have plans on going? Ticket prices are steep though. Very steep!

--I don't know what the "Sun" newspaper chain is doing by making you now pay for articles at their various sites, but guess what, I'm not doing it. When the Winnipeg Sun says I can only get so many articles for free before paying or the Edmonton or Calgary Sun says the same thing, I get the same stories for free at the Winnipeg Free Press, Edmonton Journal or Calgary Herald. I don't think that plan is going to pay off.

--I haven't even looked at the NCAA brackets yet. I need to pick a Final Four. Sadly, Michigan won't be one of the teams I pick.

--Will the Oilers make the playoffs? I just don't know.

--I've got to get my fantasy baseball teams in order.

--If you want to check out something that will cause debate, go to ESPN's Colin Cowherd's best quarterback bracket. You'll find it right here. NFL fans will love it.

--The Denver Broncos lost the services of defensive end Elvis Dumervil because of a fax problem. Who in this day and age uses a fax machine anymore?

--How much longer till the CFL season starts? Without the Pats and Warriors in the playoffs, its a long road until the guys in green get ready to go. SIGHHHHHHH!!!!

The Cougars have nothing to be ashamed of. They do our city proud each and every year. There is a committment to winning with that program and the constant trips to nationals show that the job is getting done. I'm very proud of what they did again this year.

A host team didn't come in through the back door. THey won a conference championship and they deserved to be in the nationals. THey came up cold on the wrong day. In a best of 7, those two teams would go the distance. Great weekend of basketball. Good job on the mike Scruffy

Womens college basketball? Is this the best you have? I'll be movin on now!

Proud of the Cougars. They left it on the floor. Gotta make foul shots though!

Any thoughts on the "I'm not a quitter" story in the LP today Mitch? Parker just doesn't get it in my mind. If you win, people will come into your rink. Its as plain and simple as that. What am I missing here? If someone from the Pats reads this fine blog, and I'm guessing they do, please tell me.