--The first weekend without CFL action. How did you cope? The first weekend of December meaning many were out and about doing Christmas shopping. How did you cope?  It's nice to know that whether it be December, March or July, Regina drivers seem to forget they have signal lights in their car.  Driving about on Saturday in the east and north end, I saw many incidents where we were very close to seeing a fender-bender.

--I realize the Prince Albert Raiders aren't a very good hockey team this season, but holy jeezus did the Pats lay a dirty beating on them Saturday night. 12-2!! They scored four goals in each period on Dale Derkatch bobblehead night.  They should have played a 4th period to get "16" to properly commemorate "The Rat"! I'm sure some are probably bemoaning the fact Tyler Brown let in 2 though because they have to have something to complain about.  They are not going to get 12 every night, but I don't know how you effectively shut this team down.

--Now that the Pats ownership and the Regina Exhibition Association have a new lease in place, is there any reason to think Regina won't be getting the Memorial Cup in 2018. You have to think John Paddock believes that he will be guiding the host team in that tournament with the acquisition of 17 year old blueliner Jonathan Smart this past week. Smart is an up and comer and will be a mainstay of that blueline for a couple of seasons. What else does Paddock have up his sleeve? We'll find out.

--I said a couple of weeks ago the MLS season seemingly never ends. Why after TFC's win over Montreal last week do they have to wait until December 10 to play the final?

--A tip of the hat to Ian Hamilton. The long-time Leader-Post sportswriter "retired" Friday night with his last assignment being the Cougar basketball games against the U of S.  This is a huge loss for the Regina sports community especially the University. There are a lot of good guys in this business who know what they are doing and Ian was one of them. He had a tradition of handing out Dubble Bubbles or some other kind of chewing gum before Rider games. Who does that now at the new stadium? I should also recognize reporters Will Chabun and Bruce Johnstone along with photographers Don Healy and Bryan Schlosser who also "retired".. All of those individuals were also very instrumental in the day-to-day operation of a newspaper which is slowly dying not just here but across Canada.  The L-P product bas been diminishing and will look even worse starting with today's edition.

--This past April, former New Orleans Saints defensive end Will Smith was shot in a road rage accident in New Orleans. The man accused in that shooting has been in custody since and will go on trial on a charge of second degree murder this week.  Meanwhile, the man who shot Joe McKnight is lounging at home with no charges being issued as of the time of this being written. What is the difference?  Do a Google search on the people accused in both crimes and take a look at what they look like. It shouldn't be that hard to figure out.  It is still inexplicable to me as to what happened to McKnight.  Original reports stating the accused stood over the Riders running back as he fired his weapon have turned out to be false, but the sheriff's department says McKnight was standing outside the car on the passenger side when he was shot.  Was there really a need for this? There is no indication McKnight was trying to get in the car and it sounds like the passenger door was locked. Again, you can make your own conclusions on this.

--How does Jeff Fisher keep his job? The guy has been under 500 with a Rams team that is going nowhere yet he manages to get a two year extension. I don't understand!

--Earl Thomas is in the prime of his career and the Seahawks safety is considering retirement after a broken leg. I don't understand that one.

--Its time the Oilers sent 1st round draft pick Jesse Puljujarvi down to the minors, The 4th overall pick can't get any footing as a pro when it comes to his role unlike his friend Patrik Laine in Winnipeg. Sending him down would be a plus for both him and the Oilers.

--The Winnipeg Jets still confuse me. If they confuse me, they must really be doing a number on their fans. 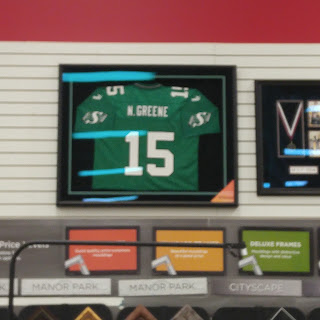 I saw this on the weekend while out and about. How long has this been for sale? Perhaps its time it was taken down.

That picture was taken at Michaels in the east end right? I was in there with the Mrs in July and it was hanging up. I asked the clerk where the Reggie Slack one was. She looked at me not having a clue as to what I was talking about.

Scruffy, I come to your blog for a curling update and with the most significant curling event to date in the 2016/17 season taking place this past weekend, i.e.; the Canada Cup, and you have nothing, zero, zilch, not a word about it.

I know Rod hates curling but I thought you were a bit more rounded of a sports reporter.

Where did you see that jersey? I want that jersey, Is it authentic game worn? what's the price? Merry Christmas to me! Like him or not, Nealon Green was a good man, decent qb for the time he gave of himself while in Saskatchewan. Please reply with info Mr Blair, thanx!

Re: The curling whiner. This isn't a sports news site, it's a blog. There's a difference.


Regina drivers are the worst out there. Some of the things people do are just laughable. No wonder there are so many auto body shops out there.

How did I cope without the CFL? Simple, I watched NCAA and NFL which are must better products and more exciting for the most part. Wisconsin-Penn State Saturday night was one of the best football games of the year

The Nealon jersey can be found at Michaels in the East end. I recognized it as soon as I saw it.

The LP, Star=Phoenix and various other newspapers are dying a slow death. They won't be around in 5 years.

The quality has been going down and this latest move just means I will search for another way to get my daily news in an up to date fashion.

Someone should buy that Greene Jersey and send it to DB or Shivers.

Man were they wrong about that guy.

As far as the Mem Cup Mitch. I always think Hockey Canada/CHL follow the money so I won't be surprised if the Mem Cup in 2018 is Hamilton and then 2019 back in Regina.

The Pats are just scary good. I don't know how anyone can beat them in the WHL.

As for MCup, all the ingredients are in place. Despite what Mr. Cone says, I think its fait accompli unless the Pats really screw up the bid presentation.

Mr Curling Guy should go to curling.ca to get his fix.

If this guy gets off without being charged in the McKnight case, all hell is going to break loose. I don't understand how this guy can be living his life after admitting to killing a man.


The Leader-Post sports department has been dying for years. This latest move is just another example to that. I remember when Vanstone, Davis, McCormick, Hamilton and Craig Slater had what might have been the best sports department in Canada. Everything was covered! If the LP dies, which I expect it to, they have only themselves to blame.

Two things, one is the LP/Star Phoenix are dead within 5 years and two eff off with curling.