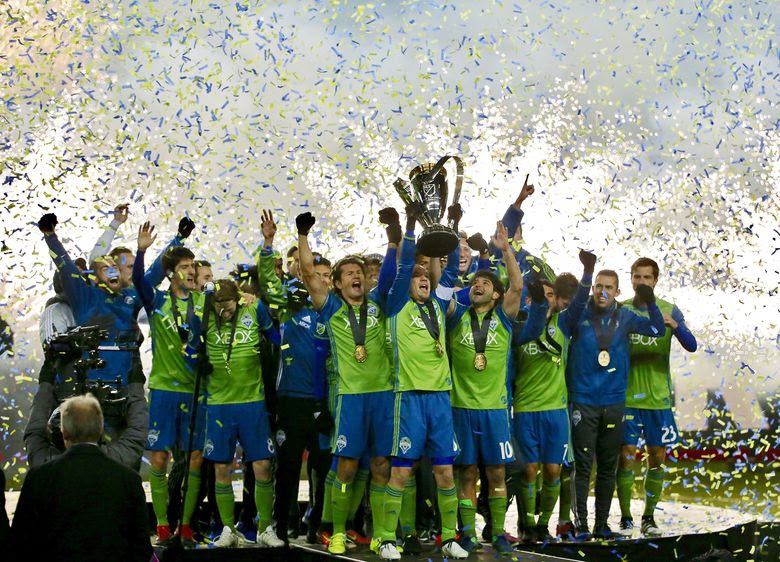 CFL VS MLS --I will be the first to admit I had no interest in Saturday's MLS Cup between Toronto FC and the Seattle Sounders, but after going out Saturday night and turning on the TV upon my return, I saw the game was in the final stages of overtime. I stayed with it to see the Sounders win in penalty kicks. It didn't take me long to realize as I saw the pictures coming from BMO Field just how much trouble the CFL is in when it comes to the other "football" because like it or not, MLS may be getting ready to pass the CFL on the Canadian sporting scene and it may have already done so in the markets where both share teams---Montreal, Toronto and Vancouver.

In looking at the numbers, the Argos averaged 16,380 fans at BMO this year and that may be kind in 9 regular season games while TFC averaged 26,583 in 17 regular season contests.  In  Montreal, the numbers are almost the same with the Alouettes drawing an average of 20,377 and the Impact 20,669 while in Vancouver, the Whitecaps averaged 22,330 compared to the Lions 21,055.  The numbers show that the CFL's three biggest markets are seeing their teams get beat in attendance by a sport that while gaining popularity in this country doesn't come close to the entertainment value---and yes, this comes from a guy who thinks the overall product of the CFL has dropped significantly.  I have to wonder if this is another area where the CFL will simply hide its head in the sand and pretend there is no problem or if they will do something to try and combat a league which is seemingly ready to pass them by in Canada if they haven't already in the three biggest markets.   You can't tell me the league didn't notice the fanaticism of TFC supporters over the last month wondering why it is they can't come close to that with the Argos. Yes, wins and losses play a huge part in that, but would you have seen a crowd at Grey Cup like you did at the MLS Cup had the Argos been in the game. We know the answer to that.

It makes one wonder if MLS would ever look at going to Edmonton for a revival of the Drillers. I don't think they would have a chance at drawing more fans on a consistent basis than the Eskimos and I know it wouldn't happen in Regina. Saskatchewan has really warmed up on lacrosse over the past couple of years due to the Rush, but an MLS team here would never come close to being as popular as the Riders.

Like it or not, the CFL has a lot of work to do to stay right where they are on the Canadian sports ladder and not drop a rung.

WHAT'S UP GUYS?? -  The CFL had a great chance to be in the news this past week as there were some league meetings in Winnipeg. Did you know about this? The only way I did was watching a Winnipeg sportscast on Friday night while clicking channels after getting home from the Pats game. Why wasn't the CFL publicizing what was going on. For that matter, what was going on?  Why the veil of secrecy guys? The NHL board of governors just finished a meeting and baseball's winter meetings were going on with plenty of news from both. You would think the CFL would learn that you need to stay in the public eye. It's obvious they haven't. As a result, we heard more about Toronto FC. Bravo CFL!!

NO MACIOCIA IN MONTREAL -  Former Eskimos coach Danny Maciocia apparently wants no part of the Alouettes new organizational structure being formed. If reports coming out of Montreal are true, Maciocia turned down a chance to be president of football operations. One of the reasons is he also wanted to be GM, but the team would have inherited him with Kavis Reed in that position. Another report goes on to say Danny would have hired Brendan Taman as his assistant GM. I'm just going to leave it there.

THE FUTURE OF KEVIN PILLAR -  As the calendar moves slowly to the end of 2016, it would appear as if the Blue Jays want to go in a different direction when it comes to centerfield.  While Toronto has Kevin Pillar, who as we know, can make highlight reel catch after highlight reel catch, it would appear as if the Jays either want him elsewhere or are looking to get rid of him.  They failed in their pursuit of former Cub Dexter Fowler who went to St. Louis, and now on the weekend, there was talk of a possible deal involving the Rockies that would see Charlie Blackmon come to Toronto, but only if Marcus Stroman was sent to Colorado. I don't think Toronto will make that trade, as tempting as it is.  It does make you wonder though if Pillar is on his last legs as a Blue Jay.

CALDER CONUNDRUM - Great question on NHL Radio Saturday.  Who is the NHL rookie of the year right now? Is it Patrik Laine, Auston Matthews, Mitch Marner or Matt Murray. (Truthfully, I forgot Murray was still eligible) One other name got thrown into the mix and that was Columbus d-man Zach Werenski who has been rock-solid for what is turning out to be a very good Blue Jackets team. One would have to think Laine would have the edge right now, but who knows.  They also talked about who the Hart Trophy winner would be. While he has had a sensational sophomore season, I don't think Sidney Crosby is ready to pass the torch to Connor McDavid yet,

CAREY'S CLOBBERING GETS NOTHING? -  I'm somewhat at a loss for words as to how the NHL disciplinarians are allowing Carey Price to get off with no punishment for hammering Kyle Palmeiri of the Devils with his blocker.  Price smacked him several times while Jeff Petry held Palmeiri down. Would that be the same if it were Cam Talbot, Connor Hellebuyck or Tuukka Rask pulling off that act.  One can only imagine the furour if Ron Hextall did that---oh wait he did do it several times.  Price is sick and tired of being run into and I understand that, but the NHL has to give him some form of punishment for what he did.  With them not doing so, I expect to see more goalies getting physical with players who try rolling them over.  Speaking of the Habs, what the hell was that Saturday night? One can only imagine what would have been written and said had Patrick Roy still been the HC of the Avalanche.

DON'T SUGARCOAT IT POP - There are many great coaches out there, but none better in my mind than San Antonio Spurs coach Gregg Popovich. He demands excellence and most times he gets it, but he didn't during a 95-91 loss to the Chicago Bulls, When asked after the game if he had his team motivated to play, Popovich responded with...

"I don't remember playing tonight. No Knute Rockne speeches. It's your job. If you're a plumber and you don't do your job, you don't get any work. I don't think a plumber needs a pep talk. A doctor botches operations, and he's not a doctor anymore. If you're a basketball player, you come ready. It's called maturity. It's your job."

SEAHAWKS STINKER -  I'll say this about the Seahawks. When they want to stink out a joint, they do so in fine fashion. The Green Bay Packers laid a big time whuppin on the Hawks Sunday thanks to some concrete hands by receivers. Russell Wilson threw 5 INT's and four of them were a direct result of the ball going off the receivers hands into the able mitts of Green Bay defensive backs. Putrid doesn't even start to describe that effort. Yeesh!

That's all I got. We're now less than two weeks from Xmas. GULP!!!  Have a good week!

The Alouettes if they screw this up may not be around in 5 years. The cfl as of hole is in trouble Vancouver could be next after.


There isn't an appetite for soccer in Saskatchewan where football and the Riders will always be number 1, but there is a definite problem, especially in Toronto.


Why would Taman leave when he is still getting paid by the Riders. He's not that stupid is he? Oh wait.

Many soccer fans attending MLS games are not football fans. The passion they have is for soccer. How do TV ratings compare between the 2 leagues? that will tell you where the leagues rate. What I find amusing is the Toronto media and how they think it was a big deal to have Toronto play in the championship. The CFL is shunned because they think it is second rate. With over 20 professional soccer leagues in the world, MLS is probably in the middle for talent. Because there are American teams and the "Major League" title the Toronto wannabe mentality thrives,

Marketing is the key as is wins and losses. The Argos, ALouettes and Lions are probably getting beat in the marketing area and it is showing.

No one knew about lacrosse in Saskatchewan until the Rush came along. They marketed it well and thanks to a championship season, their popularity is off the chart.

I will never understand the allure of soccer. It might be the most boring sport I have ever seen, but people are wild for it.

I've been saying MLS is a threat to the CFL for over a year now.

Can't really disagree with what Brad is saying.

The reason Pillar makes all those high-light reel catches is because he's late getting there.

I was at a couple of BJ games this past summer and when an inning ended Saunders and Bautista glided in to the dugout like athletes.

Not so with Pillar as he labored to second base and then walked to the dugout.

Good for the new management if they don't want him. The trouble is, I'm not sure anybody else does.

On the soccer thing, all those fans in Toronto, Montreal and Vancouver are "New Canadians"