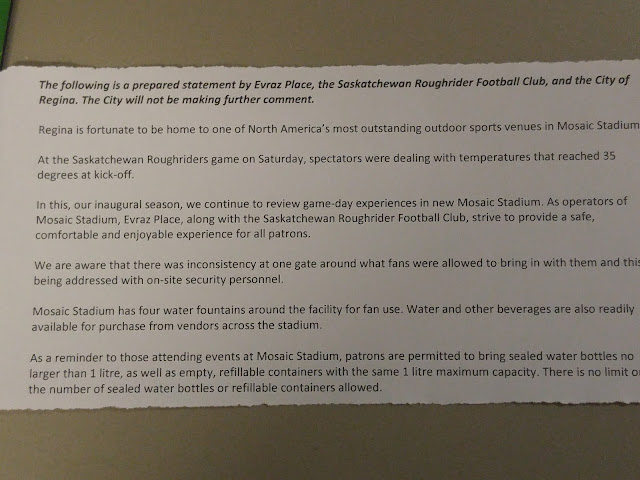 
Biggest non-story ever! Once again, Rider fans come off as the whiniest and dumbest group out there.


No more water fountains coming? Brutal! Why should I pay 4 dollars for bottled water?

The only reason this story is even being mentioned is because the former mayor's daughter started to beak off.

Greg, you should just stay home with that attitude. I'll see ya at the water fountain on that Sunday afternoon October home game.

These clowns running the new stadium regina need to speed drive east down the trans Canada to Bomber Land and see how a world class venue operates.

Several times I've read that the air conditioning didn't work in the Argos cramped locker room.
I wonder if that's a rumour because for the most part the Rider controlled media hasn't mentioned it.
But if it is true the Riders will have quite a reception next time they go to Toronto and I wouldn't blame the Argos one bit.

^^^^
Funny how the Argos never mentioned this. Why would that be if it were true? You were probably one of the jackwagons complaining about the water too right?

$4 for water is a ripoff. Plain and simple.


Guess the guy who thinks $4 for water is a ripoff won't be going to the exhibition then.

Lot of WAAH WAAH goin on


Should a lot of people be embarassed at their obvious anti-Rider, anti-city hate? I think so!

If you don't like it here, move to Saskatoon or anywhere.