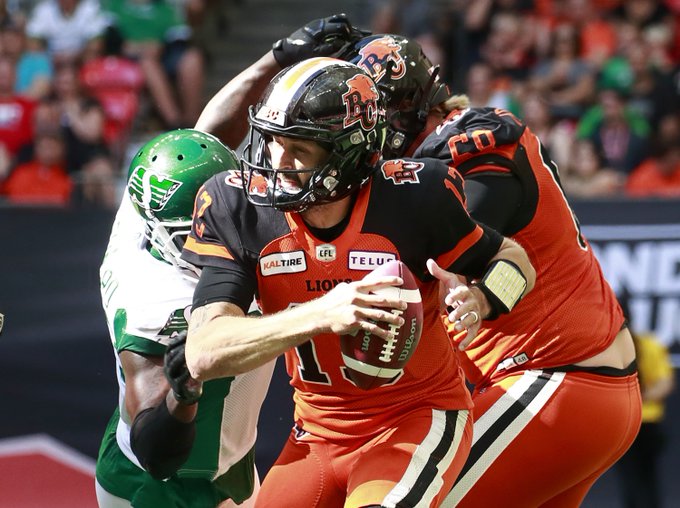 The Saskatchewan Roughriders offensive line might be in for a free dinner after helping the team to a dominant 45-18 win over the B.C. Lions on Saturday.

"I owe those guys some pizza or steaks or something," quarterback Cody Fajardo said after the victory.


The Riders (3-3) had 35 rushing attempts on the night, leading to 227 offensive yards and three touchdowns.

Fajardo put in yet another solid showing, tossing for 169-yards on 21-of-26 attempts, including one touchdown.

Where B.C. (1-6) looked listless and disorganized on Saturday, the Riders were strong and confident.

Saskatchewan dominated the game from the outset, with the offence scoring early and often, and the defence keeping B.C. penned deep in its own end.

Riders coach Craig Dickenson insisted that the game was closer than it looked, but admitted the victory was a big one.

"Our guys knew if we could come in and win this game we'd get a little bit of a head start on B.C.," he said. "It's a long season. Our guys knew that was a big game and I thought they played well."

Running back William Powell had a solid outing for the Riders, scoring three touchdowns and tallying 146 rushing yards on 21 carries.

His most impressive performance of the night came in the second quarter, when Powell took a handoff from Fajardo and snuck through a scrum before sprinting 42-yards down the field and into the endzone.

The 31-year-old native of Duncanville, Texas, said he had a "decent game."

"Any time you can get the run game going, it helps me as a quarterback, the throwing lanes are a little bit open. Offensive lineman love it when we can run the ball. Those guys really won us the game up front. Just being able at the end of the game to grind out the clock. We were able to drive the field and score."

The defeat marked B.C.'s third loss in a row.

Lions coach DeVone Claybrooks said his squad is playing "bad football" and "self imploding" in their own zone.

"We've just got to get better," he said. "We're going to meet and identify and peel back layers of the onion and look at it and start from ground zero."

Mike Reilly put up 66 passing yards for B.C., completing just 8-of-19 attempts. Late in the fourth quarter, he was replaced by Danny O'Brien, who did not make a successful pass.

Saturday marked the first time this season that Reilly has been replaced.

"I felt like the game was out of reach at that point," Claybrooks explained. "We just decided to go with Danny and get Danny some reps."

The offence simply couldn't get on track in Saturday's game, Reilly said, adding that the Riders were bringing pressure on first downs and B.C. couldn't find connections.

Still, the quarterback doesn't think the offence is deteriorating as the season progresses.

"Sometimes we show up and play pretty well together and other days we can't get on the same page to save our lives," Reilly said. "So I don't think it's that we're regressing. I think it's that we have absolutely no consistency from game to game and even honestly throughout games."

B.C.'s trouble started in the first minute when Reilly was sacked on the second play of the game by former Lion Solomon Elimmian.

A spotty offensive line has been a troubling pattern for B.C. this season. The team has a league-high 25 sacks allowed, including four on Saturday.

Injuries have plagued the O-line, forcing different players to slot in every week, and the change ups have led to a lack of communication, Claybrooks said.

The Lions did have one rare bright spot on Saturday in kick returner Ryan Lankford, who scored a pair of touchdowns with a 118-yard drive on a missed field goal and an 89-yard strike off a kickoff return.

The 27-year-old native of Jacksonville, Fla., said the plays injected some energy into B.C.'s game.

"Any time on special teams that you can score points, those are kind of points you didn't account for almost," he said. "And I think it's always an exciting play. Kind of gets the crowd going, gets the guys fired up. It's always a fun moment to be that guy."

But Lankford said there were still parts of his game that could have been better.

"On a personal level, yeah, it's exciting. But it's a team sport and I didn't do enough to win the game," he said.

The Lions will get a chance to regroup with a bye next week before returning to action in Hamilton on Aug. 10.

The time off will give the team some time to reassess, clear their heads and focus going into the second half of the season, Reilly said.

"We're certainly not in a great situation right now, but there's a lot of football left to play," he said. "But it's only going to matter if we start playing good football."

The Riders will host the Tiger-Cats on Thursday.

Very happy, but also keeping in mind the only teams they have beaten this year are Toronto 0-6 and BC 1-6. Beat Hamilton at home Thursday and I'm completely sold.

So far they've beat the teams they should beat. When the Riders beat Hamilton next week it will be because Masoli didn't play, sure hard for some "fans" to give the Riders any credit. Special Teams didn't play as well as they normally do but overall a good team win.

Wrong. Hamilton has a ferocious Defense and if they beat Hamilton, the Riders are legit

With Banks returning punts, I would make sure every punt goes OOB. Punt/kick coverage is the weakest part of this team.


Much like Lions fans BC looked like they would rather be elsewhere. If the Riders pulled off something like that, the cries for Dickinson's head would be loud.