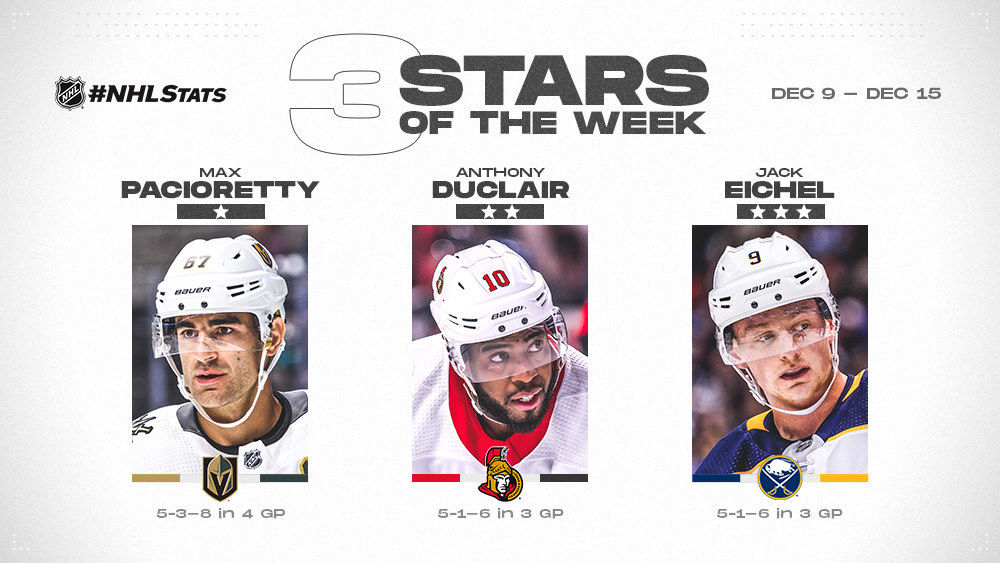 Pacioretty led all skaters with 5-3—8 in four contests to help the Golden Knights (18-13-5, 41 points) win three of four contests to move into second place in the Pacific Division and one point back of the Arizona Coyotes (19-12-4, 42 points) for first. Pacioretty, who has scored a goal in each of his last four appearances, opened the week with one goal in a 5-1 win over the Chicago Blackhawks Dec. 10 and then scored another goal in a 4-2 loss to the St. Louis Blues Dec. 12. He then registered back-to-back multi-point performances with 1-1—2, including the overtime winner, in a 3-2 victory over the Dallas Stars Dec. 13 and a season-high four points (2-2—4) in a 6-3 triumph over the Vancouver Canucks Dec. 15. The 31-year-old New Canaan, Conn., native is in his second campaign with the Golden Knights and leads all Vegas skaters in goals (15), assists (19) and points (34) in 2019-20.

Duclair tied for the League lead with five goals, including a pair of multi-goal outings, totaling 5-1—6 across three games to help the Senators (14-17-2, 30 points) capture five of a possible six standings points. Duclair opened the week with 2-1—3 in a 5-2 victory over the Atlantic Division-leading Boston Bruins Dec. 9 and then was held without a point in a 3-2 overtime loss to the Montreal Canadiens Dec. 11. He closed the week by capping his third career hat trick with the overtime winner in a 4-3 win over the Columbus Blue Jackets Dec. 14. A 24-year-old native of Pointe-Claire, Que., Duclair leads all Senators skaters and ranks tied for ninth in the NHL with 18 goals this season (33 GP) – two shy of his career high set in 2015-16 (20 G in 81 GP). Since being acquired by Ottawa in a trade on Feb. 23, Duclair has registered 26-13—39 in 55 games – only nine players in the League have scored more regular-season goals over that timeframe.

Eichel recorded multiple points in each of his three appearances last week and tied for the League lead with five goals (5-1—6 in 3 GP) to help the Sabres (16-11-7, 39 points) gain five of a possible six standings points and move into second place in the Atlantic Division. Eichel opened the week with consecutive two-goal games, netting 2-0—2 including the game-winning tally in a 5-2 victory over the Western Conference-leading St. Louis Blues Dec. 10 and then another pair of goals in a 4-3 triumph over the Nashville Predators Dec. 12. He capped the week with 1-1—2 in a 3-2 overtime loss to the New York Islanders Dec. 14 to extend his point streak to 16 games (15-14—29 in 16 GP) – the longest by any player this season and longest by a Sabres skater since Tim Connolly in 2009-10 (16 GP). A 23-year-old native of North Chelmsford, Mass., Eichel ranks among the top ten this season in goals (2nd; 23), assists (9th; 25) and points (t-5th; 48).