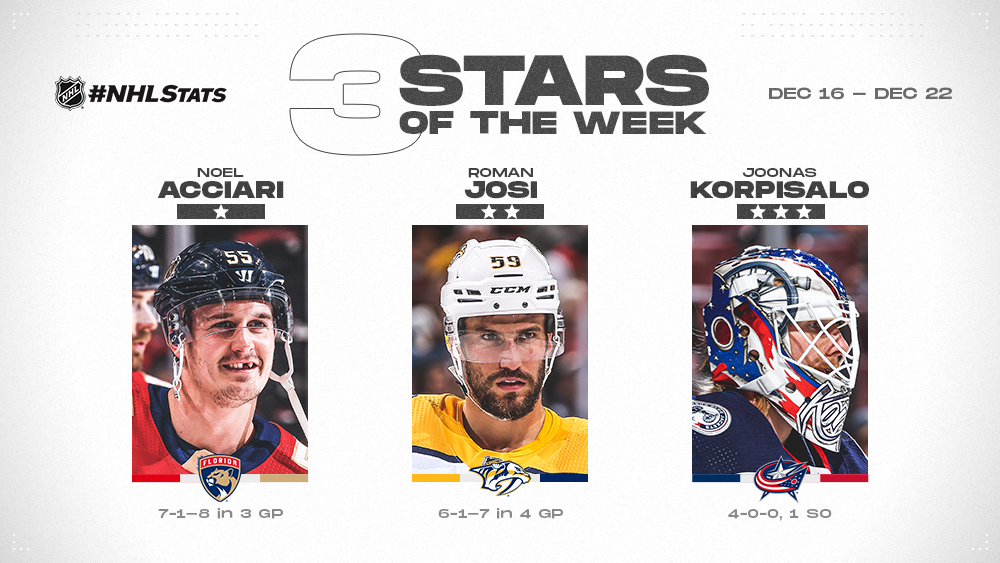 
Acciari led all skaters with seven goals last week, including hat tricks in consecutive games, and ranked second in points with 7-1—8 in three contests to help the Panthers (18-12-5, 41 points) to a perfect 3-0-0 week. Acciari opened the week by recording his first career hat trick, including the game-winning goal, in a 6-1 win over the Ottawa Senators Dec. 16 and followed it up with another three-goal performance (3-1—4; 1 GWG) in a 7-4 victory over the Dallas Stars Dec. 20. In doing so, he became the second player in Panthers history to score a hat trick in consecutive games (also Pavel Bure from Feb. 10-14, 2001) and just the eighth player in the NHL’s modern era (since 1943-44) to score each of his first two career hat tricks in consecutive contests. He capped the week by scoring one goal in a 4-2 triumph over the Carolina Hurricanes Dec. 21. A 28-year-old native of Johnston, R.I., Acciari has recorded 12-3—15 in 32 appearances this season to double his goal total from 2018-19 (6-8—14 in 72 GP w/ BOS).


Josi scored in each of the four games he appeared in last week, ranking second among all skaters in goals and tied for third in points with 6-1—7 in four contests to help the Predators (17-12-6, 40 points) pick up seven of eight possible standings points. Josi opened the week with 2-1—3 in a 5-2 win over the New York Rangers Dec. 16 and then scored one goal in both an 8-3 victory over the New York Islanders Dec. 17 and a 5-4 overtime loss to the Ottawa Senators Dec. 19. He finished the week with another two-goal performance in a 4-3 overtime win over the Boston Bruins Dec. 21 to extend his goal streak to four games. It marked Josi’s fourth multi-goal outing this season to lead all blueliners. The 29-year-old native of Bern, Switzerland, is in his ninth NHL season (all w/ NSH) and ranks among the top three in goals (t-1st; 13) and points (3rd; 33) by a defenseman this season.