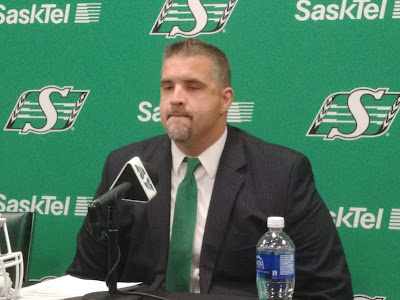 “I am very pleased to announce Jeremy O’Day as the franchises next general manager,” stated Riders President & CEO Craig Reynolds. “Jeremy is a true leader and highly respected throughout the CFL.”

“I have complete confidence he will continue to guide our team in the right direction. He is a quality person and more than ready to assume this position.”

This is O’Day’s second tenure as the Riders’ general manager after he was named the franchises 15th GM on August 31, 2015 – a positional he held on an interim basis for the final nine games of that season.

“First of all, I want to thank Craig Reynolds and the entire organization for the support and opportunity to be named the clubs general manager,” stated Jeremy O’Day. “I am excited to get to work and look forward to the challenges and successes that are ahead.”

The 44-year-old O’Day is entering his 21st season of consecutive service with the Roughriders.

The former Roughriders offensive lineman moved into the front office after retiring as a player in February 2011, accepting the position of football operations coordinator. In 2012 he was named assistant general manager, a position he held for the next four years.

In December of 2015, O’Day was named vice president of football operations & administration under Chris Jones. In this role, O’Day led many day-to-day football operations activities, including player evaluations, contract negotiations, and coordinating training camp, mini camps and free-agent camps. He also participated in the scouting of NFL, NCAA and U Sports games.

O’Day’s playing career in the CFL began in 1997, when he joined the Toronto Argonauts after a standout career at Edinboro University of Pennsylvania. He played two seasons with the Argos, winning a Grey Cup with them in 1997.In 1999, O’Day signed as a free agent with Saskatchewan and spent the next 12 seasons on the Riders’ offensive line. He started 202 regular-season games for Saskatchewan, which ranks him 12th on the club’s all-time list of games played. He also appeared in 16 playoff games and three Grey Cup games with the Roughriders, helping them win the CFL title in 2007.

O’Day won his third Grey Cup in 2013 when he was a member of Saskatchewan’s front office.


I'm not convinced this is the best hire, but I'm glad the team is putting the pieces back together quickly. GO RIDERS!


Good for JO to put this Durant coming back talk to bed. Yeesh!

I'm scared for this season

This is not a good hire. "Any legit professional sports entity" cannot succeed on a hiring based on nostalgia. Due diligence thrown out the door in a rushed decision, (another week would have sufficed for interviews to gm replacement, CFL season aint going anywhere soon with no CBA). It's very obvious to anyone with intellect that higher up team brass dictated this hire to team president. Same move demanded last time around, this is how it's going to be CR, CJ... retain JO against your better professional judgement. Whats a person to do? hire someone reluctantly, make up job title for the charity case hire while appeasing the brass. Sad reflection... on a organization as a whole. Now... moving forward... allowed continuance of past losing football left to percolate... again, wait and see. No wonder a team awful four championships in a 100 plus year history. Way too much behind the scenes offside interference going on. Tsk tsk.

Great job this week on SportsCage you are right where you need to be and a pleasure to listen to. That was a tough jam to be put into and thankfully you had the previous experience so it just fit like a glove. Onward and upward and the show had less of a negative edge to it this week. More folksy charm is how I put it.

Jeremy O'Day is the right guy at the right time. His saving grace is they got Paul Jones under contract as had that not happened with Murph leaving then it's a disaster. There will be talent coming in.

The issue is not finding a coach. I wanted to call in yesterday after that Cory from Weyburn and say here is the issue. The money for the cap is spent. - you can fire guys but that money is spent it's on the books. So now you have limited money, and you have body cap of 11 people. On short notice he needs a guy to do two jobs. This leaves you Mike Benevedes or Jerry Glanville.

Jerry Glanville is the guy for 2019. He is the Barry Switzer of this situation. He will have respect, he'll run the D, work cheap and use what is in place for an existing staff. Switzer did that in Dallas with Johnson's staff under the provision any insubordination they are gone.

That's the only way you make it through 2019. Past that if you shuffle chairs around you have a gaping hole on Defense to go along with the gaping hole on Offense and welcome to a 3-15 season.

Was Reynolds right in not hiring him in 2015? Where would the Riders be today if he had? Learning from Jones was a huge thing for O'Day and he can take that knowledge and move forward with it.

Looking forward to seeing what the next chapter holds. Same could be said for Sportscage.

Please tell me Michael Ball will not be moving into Rod's spot. If it is, I won't be listening.

Micheal Ball is a great, knowledgeable sports guy for sure, but I agree he would not be a good fit for the Sports Cage because he lacks folksy charm. The show needs to stay with its more rural spirit, in contrast to the competition's show which has a more urban, intellectual base. Mitchell Blair is the right fit for the Sports Cage and just needs the right side kick.

IF Michael Ball moves into that spot not a chance would I listen to it either. Say what we will about Rod Pedersen, but if you look solely at his ability to call a game he was/is world class. Michael Ball is where he needs to be calling U Sports for the parents who couldn't make the road trip. I don't even listen to his post game show. Luc should stay as the color analyst, but as a play by play guy it'll be a tough spot to fill....speaking of if I had to decide then Phil Andrews would be the guy I would be calling for this job. Lynch, Courier, (transition guy after Courier who was awful), then Pedersen - that's 3 out of 4 heads over 40+ years that are on the Mt Rushmore of Rider Play by Play guys.

John Frenzy Lynch doing play-by-play for the Riders in 2019 would be GOLD!! If Bob Cole can still do it why not John?