The Man In Black Becomes A Brown 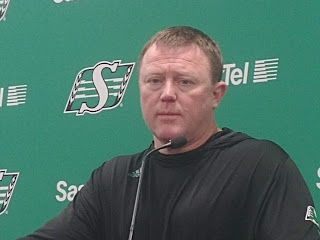 “We are proud of what Chris came in and accomplished through his three seasons as general manager and head coach,” stated Riders President & CEO Craig Reynolds. “His work obviously didn’t go unnoticed and we congratulate him on his opportunity in the National Football League and thank him for his contribution to the Saskatchewan Roughriders.”

Last season, the Green and White finished with the CFL’s second best record at 12-6 and hosted the West Semi-Final.

Jones was named CFL Coach of the Year for his efforts.

Reynolds added, “We are fortunate to have many quality football leaders and coaches on our staff. We will evaluate and will look to fill the vacancy quickly.”

The Riders also announced Tuesday receiver Jordan Williams-Lambert has been granted his release so he can pursue an NFL opportunity. It is believed JWL will be signing or has signed a deal with the Chicago Bears.

The story from the Cleveland Plain Dealer on Jones' hiring can be found here.

Like it or not, this is the fault of Craig Reynolds. Gave him wayyyyy too much power.

They have a huge mess to clean up and O'Day is not the person to do it, but he is the person who gets to.


The Duke said it the best.

So where's all the comments from the "In Jones we trust' crowd?

Good on Duke. he put it in perspective.

And he left us saddled with Stephen McAdoo.

This falls on Reynolds plate. He gave waaaaay too much power to Jones in all those positions held.

Only one road to success and that is with an elite quarterback, and except for Hamilton with Masoli and the winner of the Mike Reilly lottery, things look pretty bleak for all the CFL teams for 2019. South of the border, the NFL has seen a real upswing in the emergence of superior talent at the position.

No other football teams or league opportunities came knocking at Jeremy O'Day's (Taman protege) door because he's not qualified (still relays on Tamans advice) so why should he be handed the gm job? That's charity if that happens and not well thought out moving forward by the football club. O'Dsy = Roughriders back with a less than mediocre Durant getting ludicrous money, Dressler catching nothing, Dyce head coach. Due diligence Mr Reynolds, get it right.

Guy is a complete buffoon and is at the place where he should be. I mean Belton and not Flory.


Team improved under Jones. They have gone from being GC favourites to middle of the pack now as far as I am concerned.

A major step backwards for the organization and one Reynolds has to take responsibility for.


January 15 will go down as a great day in Rider history. The day they rid themselves of Officer Barbrady from South Park!

Yeah, it's when the CFL's reigning coach of the year left for the greener pastures of a real professional football league, NFL baby! Left the little hickville hamlet known as Regina and its clueless inbred fanbase called Riderville a crying and a whining. Good on Chris Jones, good luck in Cleveland!

Sign a contract last week, break it this week. Yep in Jones we trust.

A little karma there. Now Reynolds knows how Edmonton felt when he stole Jones from the Esks.