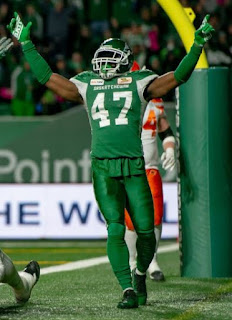 The Riders have released soon to be free-agent Sam Eguavoen.  The move is being done so he can pursue an NFL opportunity.

The 25-year-old has spent his entire three year CFL career in Saskatchewan.  He picked up 159 defensive tackles, 14 special-teams tackles, four quarterback sacks and one interception in 38 regular-season games. He also added one 30-yard fumble return touchdown.

Eguavoen has worked out for several NFL teams over the past couple of weeks so it would appear as if he is ready to sign a contract with one of those teams.
at 1/02/2019