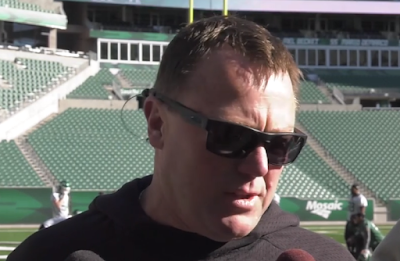 Saskatchewan Roughriders President & CEO Craig Reynolds has announced Vice-President of Football Operations, General Manager and Head Coach Chris Jones has signed a contract extension to remain with the club through 2020.

“We are pleased that we have reached an extension with Chris,” stated Reynolds. “Under Chris’s guidance, the team has improved year over year and developed into one of the league’s top rosters. We are excited for what’s ahead for our football team.”

Originally hired on December 7, 2015, Chris Jones will enter his fourth season with the Riders.

Last season, the Green and White finished with the CFL’s second best record at 12-6 and hosted the West Semi-Final. Jones was named CFL Coach of the Year for his efforts.

Additionally, the club announced that Assistant Vice-President of Football Operations and Administration Jeremy O’Day has signed an extension through 2020. O’Day originally joined the club’s front office in 2011 after playing 12 seasons on the Riders’ offensive line. O’Day will be entering his 21st consecutive season with the Riders.

The Riders have added Paul Jones as Assistant General Manager. Jones spent the last 21 seasons with the Edmonton Eskimos where he was known as one of the CFL’s most respected scouts. Jones signed a two-year contract, keeping him with the club for the 2019 and 2020 seasons.

Riders’ Director of Football Administration, Mike Davis and Football Operations Coordinator, Jordan Greenly will both return to round out the front office.


In the words of C. Montgomery Burns...EX-CELL-ENT!!


I'll just assume O'Day is our GM in 2020 and will have the job of picking a new head coach.
I say 2020 because I will assume Jones will be US bound at the end of the year.

You assume wrong, very wrong. Paul Jones is next in line for Roughriders gm, head coach, vp job should that be required. O'Day's idea of hiring a coach is now working for the REDBLACKS in a minor role. Paul Jones will be in charge of all and any team decisions should they be necessiatated.

"IN JONES WE TRUST"

Assuming #2 post wants O'Day as gm 2020 who would asuredly bring back Bob Dyce back as his head coach. Good grief, those 2 clowns arn't even qualified to be anywhere near a football.