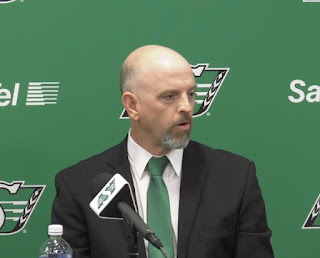 --The Craig Dickenson era is upon us and if a Twitter poll I put up Friday is any indication, it is a hire that is being met with tremendous approval by Rider Nation.   Over 90 percent gave the move a thumbs up.  If I had voted, I would have done the same.

From the time Chris Jones packed up his motorcycle and headed for Cleveland, I was all-in on Team Dickenson.  Yes, I would have rather had him than Paul Lapolice in here and that is no slight on Lapo either.

Dickenson deserves this.  He has been an assistant for a long time and the opportunity has finally presented itself.  Yes, a valid argument can be made for whether or not he would have been hired had it not been for the CFL's coaches salary cap, but the bottom line he is getting that chance.  Some wonder if he is too nice a guy to have the job.  I guess the answer to that question will be determined over the next few months.

If you heard the press conference, there were several quotes from both O'Day and Dickenson that I found interesting.  It came referring to the "culture" of the organization.   Hey, I will be the first one to tell you that Chris Jones maybe didn't embrace the values of Saskatchewan football, but he came in to build a winning program which is what he did.   As is the case when someone new takes over at anything, there is going to be change.  I just hope the change isn't as dramatic inside the dressing room as to what I think it will be outside of it.   When it comes to being all business on the field, that is what a fan should expect.

--Duron Carter sent his endorsement to Craig Dickenson via Twitter on the weekend.  It had some saying he should come back.  Stop it!  Duron has worn out his welcome here and perhaps in the CFL altogether.   There is no doubt he can play, but there is also no doubt that his behaviour in and out of the room is a huge concern.  Coaches talk, players talk.  I would be stunned if Carter is at training camp with this team and stunned if he has a CFL job when training camp begins.  You can only give a guy so many chances before saying that's it.

--With Dickenson at the helm, the question now moves to who is defensive co-ordinator and yes, we can't forget about the quarterback.  When it comes to the DC, I would think you might want to take a good hard look at Jason Shivers. The current DB's coach is said to be one of those up and coming coaches and as long as he was here under Jones, he wasn't moving up the ladder.  His time may be now. It may also cure the coaches salary cap crunch the team is under.

--One word summed up Saturday's NHL all-star game for me.  That word be "YAWWWWNNNN". I couldn't even get through the first half of the first game before turning the channel.  The 3 on 3 was boring as the players were just out for a beer league skate having fun.  No thanks!  I don't know what you can do to fix things, and while I don't like it I do understand the want to have a mid-season celebration of the game.  However, the game isn't a game.  Some said they should incorporate women into the game after the performance of some at the skills competition.  Sorry, but that doesn't do it for me either.   All-star games are a joke and if we lost them altogether or played it at the end of the season, it wouldn't bother me one bit.

--I can't believe the amount of people offended by the decision by Roy Halladay's wife to say his Baseball Hall of Fame plaque will have him wearing a hat with no logo on it.  Blue Jays fans are irate! This isn't your decision! If this is what the family wants, so be it.  Who the hell are you to say otherwise?  At the end of the day, does it really matter?

--The Moose Jaw Warriors finished a seven-game road trip by getting 13 out of 14 points. In a year where a lot of people thought Moose Jaw would take a major step back after losing the likes of Clague, Halbegwachs, Jeannot, Burke and Howden, the Warriors are showing that maybe they have a playoff run in them they didn't have for the last two years.  I'll be interested to see how that story plays itself out.

--Congratulations to Robyn Silvernagle for winning her first provincial ladies curling championship.  She should be able to do herself quite well at the Scotties. In what will be another great field, I can see Silvernagle being a playoff team.

--If you want a good read, go to ESPN.com and read their story about the in-fighting with the Cleveland Browns last year.  Its quite the story.


Jones was a good coach, but I don't know if he truly understood what it took to be successful off the field here. I don't think he wanted to.

Dickenson is a breath of fresh air. I am excited to see what he can do.

Hope Paul J can bring him a QB to start developing


Stefanie Lawton off to another Scotties. She is soooo underappreciated.

Sure would be nice to know what those who don't like the Dickenson hire are thinking when they say that!


Jones won, but established a bad "culture" as far as the fans went. Dickenson/O'Day need to bring back the sense of having this team be a part of the community while not erasing the winning atmosphere that was created.

It won't be easy, but it can be done.


Word around the campfire is you have no interest in being the next Rod. Can you confirm or deny this?