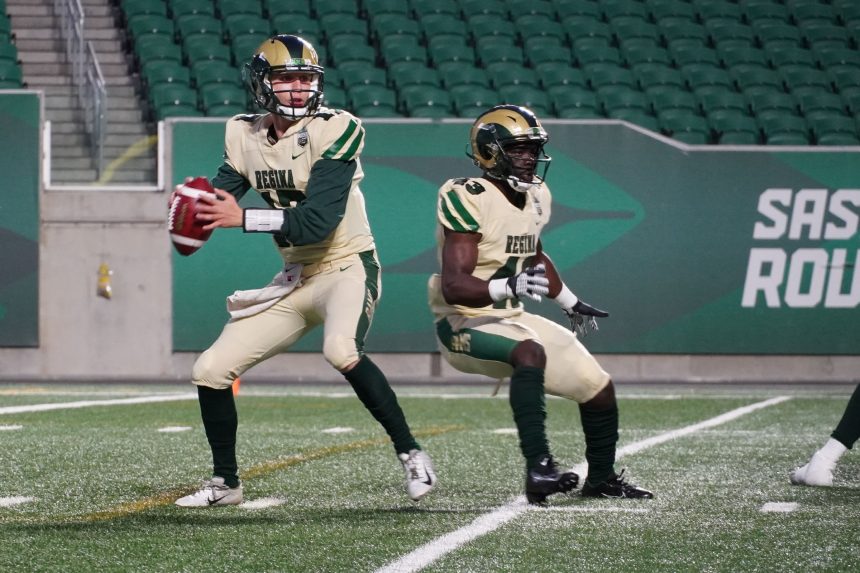 Picture: U of R Athletics

The University of Alberta Golden Bears held on for an 18-17 road win over the No. 7-ranked Regina Rams on Friday night in a Canada West game at Mosaic Stadium.

The Rams (1-1) led for the majority of the game until a two-play sequence late in the third quarter. After a bobbled snap on a punt, the Golden Bears took over deep in Rams territory and immediately struck paydirt with a 14-yard by Jonathan Rosery.

That gave Alberta (1-1) a slim one-point edge, and the Golden Bears survived two Rams field goal attempts in the final quarter to hold on for the win. Troy Hansen blocked one of them midway through the fourth, and Aldo Galvan's attempt from 42 yards out sailed right of the upright with just seconds to go on the clock to seal the win for Alberta.


RAMS HIGHLIGHTS
Three Rams receivers had over 60 yards, including Ryan Schienbein with a game-high 85 and Kyle Moortgat with 78. Bennett Stusek also had six catches for 61 yards. Cord Delinte had a team-high 8.5 tackles and also had an interception, while Robbie Lowes and Eric Wicijowski both had sacks.

The Rams and U of S Huskies will meet next Friday night at Mosaic in a battle of 1-1 teams.  The Huskies got their first win of the year beating UBC 40-6 in Saskatoon on Friday.

I love this time of year. CFL, NFL, US College, Canadian University ball